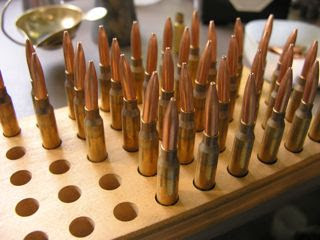 I load the 5.56 ammunition for the Texas National Match Team Infantry Trophy match.  384 rounds a team, two teams.  Plus the practice ammo.  It adds up to about 1200 rounds.  At Camp Perry, when they call the team to the line for IT a judge counts our ammo at a table behind our firing points and then we can load it into magazines.
384 rounds a team shot at 600, 500, 300 and 200 yards.  Targets are exposed for 50 seconds at each yardline.  The team starts at 600 so the coach has to make a perfect wind call and nobody can miss.   Each shooter shoots approximately 64 rounds.
4 points a hit at 600, 3 points at 500, 2 points at 300, 1 point at 200.  At each yardline you get the number of targets with at least six hits, squared as a bonus.  Hit all eight targets and you get 8X8, or 64 bonus points.
The winning team will have very few misses and square all the targets.  Six guys shoot at eight targets, so you have to have a fire plan for each yardline.
I'm packing the ammo in cans now.  We stripper-clip the rounds for easy counting and loading.  I include stripper/mag spoons in the can along with sacks to pick up brass and a copy of the fire plans based on amount of wind.  Rick Crawford also includes stainless steel rulers that you can insert into your 30 round mag to see how many rounds are loaded.
Our team load is a 77 Sierra bare Matchking on 25 grains of Varget with a CCI 450 small rifle primer in a Lake City brass case.  I'm loading all the rounds on a single stage press with a hand primer and a Harrell Powder thrower.
We practice and plan but never shoot very well.  Usually the wind call is off.  Often one shooter is off.  The TSRA team ends up being in the middle of the pack.   All you can do is shoot your shots with the given wind call and not make a mistake or shoot a miss.
Team Blackfork, a 3-man team I run during the year is very competitive.  Usually we win.  We shoot a very conservative fire plan with two guys shooting at only their target and one man on the end shooting two targets by himself.  (the "swing".)  50 seconds to shoot 24-28 rounds is plenty of time to shoot well and not miss.  600 and 500 are shot prone.  300 is shot sitting and 200, if needed, is standing.  200 is only worth one point a hit so you try to shoot all the ammo at 600, 500 and just enough to square the targets at 300.
Infantry Trophy is one of the traditional matches at Camp Perry.  It's a thrill to shoot it and walk downrange in a line following the flag to the next firing line.  Some teams shoot Garands and even bolt-action 1903 Springfields.  It's the last team match that gets shot during Civilian Marksmanship week.
Posted by Robert Langham at 9:36 AM