Cute deer photos of the day. 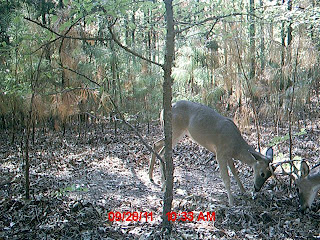 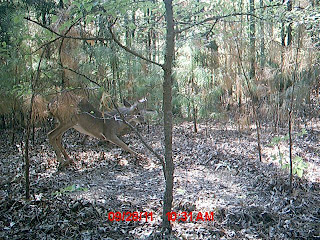 These little bucks are both 1 1/2 years old. Not legal antler width. They are certainly safe from me and I hope everyone. Fun to have around.
Posted by Robert Langham at 11:26 AM No comments: 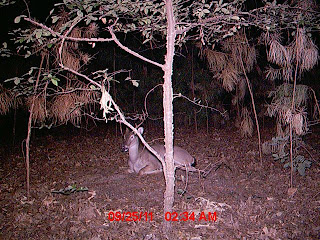 Dumb and relaxed. Rare that I get this photo. 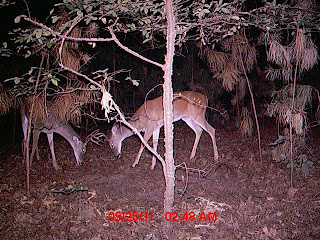 A little sparring between friends. 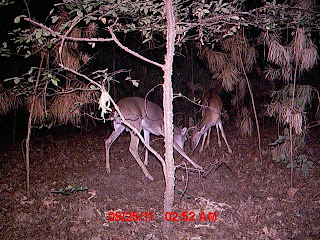 Four little bucks flowing around my upper cam across the creek. Still got two cams dead with no relief in sight.
Posted by Robert Langham at 6:25 AM 2 comments:

I did a little Bigfoot compilation off deercam slides with corny titles and cheesy imovie soundtrack music. Built it purely as a hit-collector. Went up yesterday. It's got 80 hits already. It's dumb, but hoping for a real breakout with a slightly different audience than usual. The Bigfoot people really love Bigfoot. Heck, I love Bigfoot. See him all the time on gamecam. Going to start saving those files for Bigfoot II.
Posted by Robert Langham at 11:10 AM 3 comments: 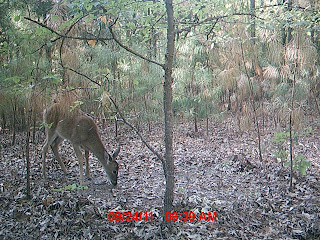 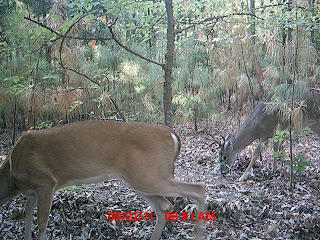 One nubbin fawn and three year and a half six and eight pointers. They look like does with horns. In two years they will be nice deer but this year they will be bopping around in shock over the happenings during the rut. Folks shoot them because they tend to turn up and stand still, though none of them are of legal antler size. Here's hoping they all make it!

They are loving the corn. Probably on all three cams. Two of my cams are currently belly-up. They are taking photos but not putting them on the cards. Never had that happen before. Electronic mystery.

Actually worked on a tree seat today. Put in a couple more climbing steps and found the place for the plastic chair.
Posted by Robert Langham at 2:03 PM No comments: 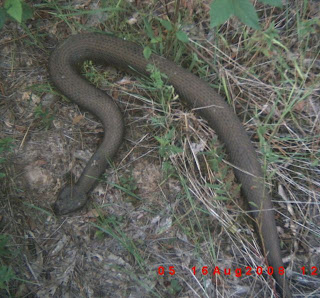 Photo doesn't do justice to the massive heavy body of this snake. He was about 30 inches long. His head was thick and angular. Very impressive snake, but fragile as most of them are. I killed him with a dry stick.


A couple years back I got spooked when I smelled a big snake while crossing the creek at the main ford. Finally bumped into the snake and he was a huge cottonmouth moccasin. I killed him, mostly because I had smelled him so often but never been able to find him. Taking him out of the ecosystem was bound to shift the local pecking order- snakes are very territorial and not big travellers.
Today Lucie and I made the cam run and I smelled another big snake at the same crossing. Couldn't see him.
Posted by Robert Langham at 7:15 PM 8 comments: 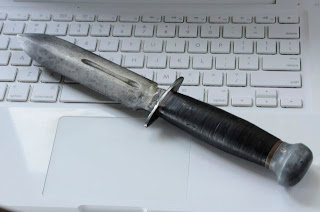 Let's see how this works....you just pull the knife you are carrying out of your pocket, put it on the keyboard and take a photo? Seems easy enough.

In this case it's a PAL RH-36 that some WW2 serviceman thoughtlessly ruined by grinding the blade into a dagger configuration. Shame.
Posted by Robert Langham at 7:46 AM 3 comments:

Now you know everything I know. Plus a little more.
Posted by Robert Langham at 8:18 PM 1 comment: 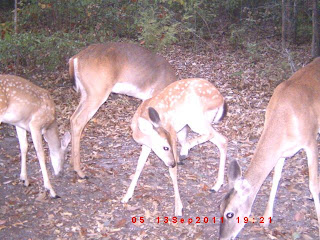 Both the spotted fawns are little bucks. 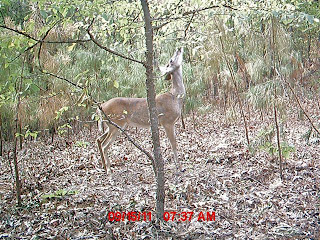 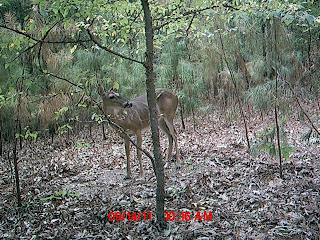 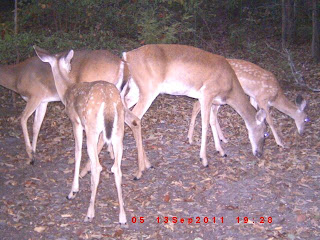 Can see ribs on the grown does. Dry range conditions for six months. They are usually down a bit, but this seems excessive. Very glad to have corn.

Still having cam problems. Some of them turned out to be on the reader I was using at the computer. It's replaced. I'll keep trying. The cam counter would say there were photos but when the card went in to computer port it would register as 'No photos or video." I changed ports. Helped on one card.
Posted by Robert Langham at 3:13 PM 4 comments:

Looks like some early Dino or Bird feathers in amber. Pretty neat. Exactly like Jurassic Park.
Posted by Robert Langham at 2:25 PM No comments:

Work in Progress: How to site your game-cam. 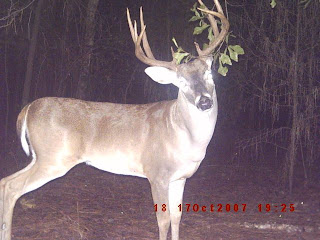 The dog and I went out with a camera and tripod and made a run. Need a little more tape to make sure I have all the points covered on how to set up a cam for good photos.

Update: It's up! This little deer in the photo has survived as far as I know. Must be a monster by now, but as wily as Bigfoot.
Posted by Robert Langham at 5:53 PM 2 comments:

Record night for Armadillos up at Kickapoo Ranch, but not much else. 25 deer, no big bucks. Couple of coons and an opossum. Carried a little .22 but can't bring myself to shoot dillos. Alan has a night vision system that really works well and the Bronco was running so I could see well from the raised seat while he drove. All three surveys done so now the numbers can be crunched and submitted to the state biologist who will issue the permits. The deer numbers have been cratering for three years or more. We used to count in the 50s-70s. This years counts were 32, 11 and last nights 25. Unknown what is going on though those totals do parallel the drought.
Glad to have it done though I only have a small part.

I was in downtown Tyler up in the black tower at Trinity Mother Frances Marketing services. I was dropping off some work and immediately driving to Dallas for a shoot with the North Texas Tollway Authority. John Moore, the media representative kept five TVs and tape machines in his office so that he could monitor and record health care ads for TMF and the competition. I was about to take off when John leaned out of his office and said "you better come watch this." He had all the channels going. The first tower was burning and the coverage just starting. We watched the second plane come in and then the towers fall.
I never made it to Dallas for the shoot.
Posted by Robert Langham at 12:50 PM 1 comment: 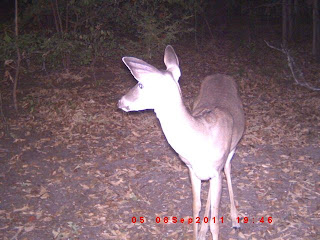 Very early fawn with just a faint line of spots down it's back. 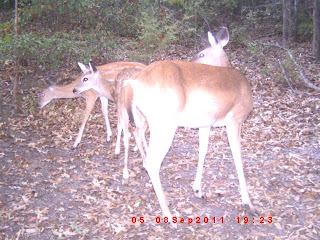 Later twins still in spots. The age difference between these fawns and the one above means the rut went on for months. 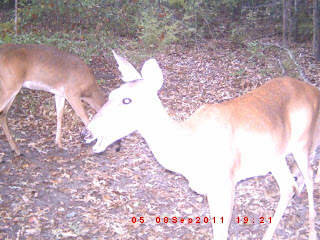 Corn-cracking momma. Since there hasn't been a doe tag in Smith County in 60 years, this doe is probably 5-9 years old. Look at that long face. She's an experienced pro.

Very dry and Butler Creek is just a murky trickle, though Lucie likes to charge up and down in the shallows when we cross coming and going. No scrapes that I have noticed. Dead trees. It's like we are undergoing desertification. Big pines out in the pastures are dead and will start dropping limbs in the spring.
All corn gone but it's a blank card on one newish Moultrie Game Cam, raccoons on the hill and my really bad Moultrie that wouldn't fire it's flash is now firing it day and night and overexposing all files.
I cut some dead dry Poison Ivy vines off a new tree that might get a seat in it. More corn at 10 bucks a sack. Making Ethanol to save the planet instead of food and feed. Good plan.
Posted by Robert Langham at 1:20 PM 2 comments: 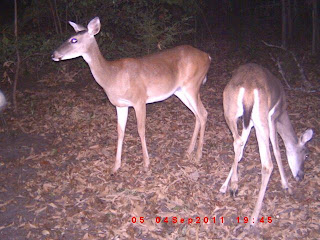 Nice healthy looking does. Helped to have the creek running all year. 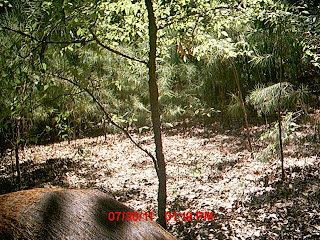 Here's a close one. I think I am going to start putting a little bit of corn on the other side of the tree.

First time to run the cams in weeks. I did check one yesterday and had a blank card. Hadn't run them since before Camp Perry, the first week of August.

All batts dead. Blank card on a good cam. (I toss those cards.) Corn gone from yesterday and a doe with two fawns, then three other does on the cam. About time to add another cam back and check them regularly.

Deercount tonight in Clarksville, so tomorrow will be a wasteland. Home about 2:00 in the morning.
Posted by Robert Langham at 2:05 PM 1 comment:

Clay Hefner is one of those solid masses in the universe that tends to collect energy. Things just seem to HAPPEN around him, for good and ill. (Mark did get his truck out of the pond, but it had to be towed.) At Camp Perry I hitched a ride back to the Mar-Lu with him and most of my equipment blew out the back of his truck. My Kowa scope took quite a beating but seems to work fine still. Scary stuff. I had gear scattered all over a two lane road in Yankee traffic. 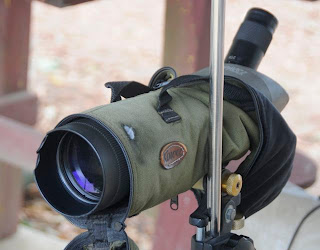 Thank goodness it was all zipped up. The stand took most of the initial impact. Could have been totaled. 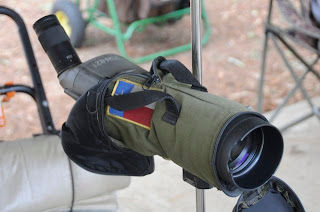 One of the Team shooters at Camp Perry on the Six-Man team shot Berger 82s and used about a minute less windage than our standard Sierra 80 VLDs. I thought I would give them a try. He was shooting an older barrel,(3000+ rounds), and a reallyhot load of Varget. i ran them at my standard Sierra 80 grain load o Varget, 24.6. They shot the same zero as my Sierras, 1/4 minute less elevation. 193X5 at 600. No pressure signs so I am going to bump the load up a little to 25 grains. Could be that just the faster velocity is making the difference. 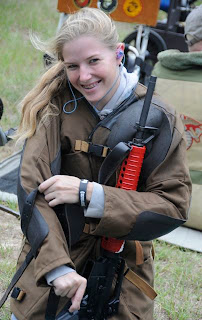 Posted by Robert Langham at 9:14 AM No comments:

Great little valley full of old ruins of cliff dwellings. One of my favorite places that I went many times while on Spring Break from college. Photographer paradise. Glad to see that people are reliving the ancient ones activities! I guess. At least the land is still getting a little work.
Posted by Robert Langham at 3:53 PM 2 comments:

I've always wanted one of these but they are impossible to come by. Narwhal tooth. Ivory. Great thing, usually broken on the tip. Be wonderful to see a full skull and tooth. There may be replicas made.

Once I was in Galisteo, New Mexico with friends and we visited at a house that had a large toothed bird skull on the wall. It was just astounding, nearly three feet long and toothy as heck. It was years before I figured out that it was a dolphin skull. Illegal to have, like lots of things. Eagle, hawk and owl feathers are illegal to possess.

Update: None on Ebay.
Posted by Robert Langham at 2:19 PM 2 comments: