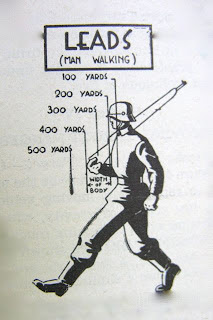 Tomorrow morning we start traveling to Camp Perry.  It's a two-day trip.  We'll be just south of Louisville, Ky in a motel tomorrow evening, God willing.  760 miles.
Rick will be driving his new Chevy truck.  He drives, period.  Rare to get the wheel away from him.  His philosophy is that if he's awake and traveling, he might as well be driving.  I've learned it's a lost argument over the years and just watch the maps and weather and read the papers.
I read every paper, starting with the Dallas Times Herald, The Tyler Courier Times, Longview, Marshall, Texarkana, Little Rock, Memphis, Nashville, Louisville, Cleveland, Toledo, Lima...all the newspapers for sale all the way up and all the way back, even the little free shopping guides.  It's different than news on the internet.  There are more local stories.  Local pictures.  Local ads.
Last year, going and coming I was struck by how many stories of conflict between government and citizens there were.  Town Council members mocking citizens at a meeting in Cincinnati, Police killing an unarmed teen by mistake in Memphis, a corrupt bureaucrat in Little Rock, a church leading a protest in Louisville, swimming pools and libraries being closed because of budget, firefighters on strike for more pay, et, et.  Seemed like most of the stories were about government doing something or not doing something or wanting more money.
Maybe it will be all sports stories this year.  I've got a pocketful of quarters.  We'll see starting tomorrow.
After I'm there, I hardly read a thing or have a cup of coffee all week.
I'm going to try and post from Springfield Armory and their computers during the week.  If not, see you in ten days here and with a bunch of new videos on the Blackfork6 Channel on Youtube.
Posted by Robert Langham at 7:23 PM

Hold 'em and squeeze 'em.
Good luck, I like your chances.

(The redhead is re-decorating the whole house while you're away.)

(Possibly your blog too. Don't be surprised to find colors & flowers & girly stuff wrapped around all these photos of guns.)

Even heavily armed, I get no respect!

You must be reading some old newspapers. The Dallas Times Hearld went out of business years ago.Are sure that you don't mean the Dallas Morning News?

Yeah, yeah, yeah. I did used to be able to read two Dallas Newspapers didn't I? Those were the days. Now there is one.