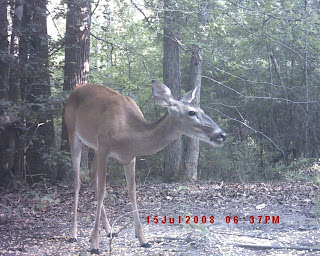 Via the old Moultrie.  It said it's memory was full but there were only 46 images on a 512 card that had been cleared.  Maybe the camera memory is not erasing.  It said there were 298 photos.
This doe has two fawns with her most of the time.  Range conditions are good but she looks a little worn down.  I can see her backbone and ribs in some of the other views.  Not extreme and probably normal for feeding two fawns.  She's an older doe-look at that long face and developed body.  Lots of experience.
She was really going at the corn on the cam.
I jumped two young does coming back from the cam.  I THINK they were laying down in the tall grass in a field.  I had the wind and they didn't bolt until I was close.  I went and looked but couldn't convince myself that I was finding beds.
Not one buck in velvet yet, and they are growing horns by now.  Odd year.  Normally, I have seen most of the bucks by this point in the summer.
Posted by Robert Langham at 7:21 PM