By all accounts a great weekend and a very well-run match near Pearland.  Keith Stephens won the Service rifle Championship with a 776X24.  Nearly 100 folks shot.  The club had the range in terrific shape.

On Sunday the LEG match had 63 non-distinguished folks firing in hot and windy conditions.  Buddy Reich finished his Distinguished Rifleman's badge and several other folks got closer.  Great matches all around.

...until the bear eats the monkey.
Posted by Robert Langham at 7:18 PM 1 comment:

Guess they need to add hornet spray to belt.  It's happened before here and there.  Never thought about it.
Posted by Robert Langham at 3:39 PM 2 comments:

Found in the English Channel.  I can't believe there is much left, but godspeed to them.
Posted by Robert Langham at 8:15 PM 1 comment:

Some might recall when I put a game cam up over a freshly dead cow and recorded the comings and goings of all the predators and scavengers.  This beats that.
Posted by Robert Langham at 12:14 PM 1 comment: 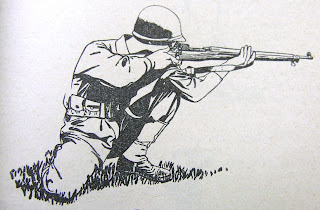 My cousin Steve is in the area, he came over for a visit and we got to talking Garands.  When he was a Marine Recruit at Parris Island in 1960 they still shot Marines.  He hadn't held a Garand since then...and me...well, Garands as common as housecats around here.  He got his hands on my darkroom Garand.

This is how the USMC taught Garand functioning in 1960:


ACRONYM FOR REARWARD MOVEMENT       I AM U WE CAT

Transcribed From Recruit Issued Materials / US Marine Corps Recruit Depot Paris Island (Circa Korean War)
U. S. RIFLE CAL. 30 M-l
Forward Movement:
(1) Action of the compressed operating rod spring: As the bolt starts forward, actuated by the compressed operating rod spring the lower part of the face of the bolt comes in contact with the base of the top cartridge of the clip, sliding it forward into the chamber, the hammer actuated by the hammer spring rides on the bottom of the bolt, and tends to follow it, but is caught and held by the trigger lugs, which engaged the hammer hooks. If the pressure on the trigger is still held back after firing, the sear will engage the rear hammer hooks, subsequent release of the trigger dis-engaging the sear from the hammer which then slides into engagement with the trigger lugs.
(2) Feeding: When the bolt approaches its forward position the rim of the cartridge is engaged by the extractor and the base of the live round forces the ejector into the bolt, thus compressing the ejector spring.
(3) Locking: The operating lug on the bolt cammed downward by the camming surface of the operating rod. This rotates the bolt clockwise engaging the locking lugs in the locking recesses. This locks the bolt.
(4) Termination of the forward movement: The operating rod continues to move 5/16ths of an inch until the rear end of the straight section of the recess in the operating rod contacts the operating rod lug on the bolt. Thus the rifle is ready to fire. 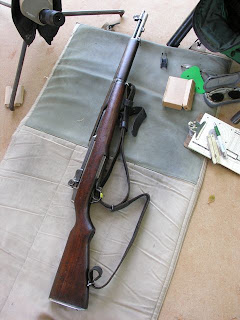 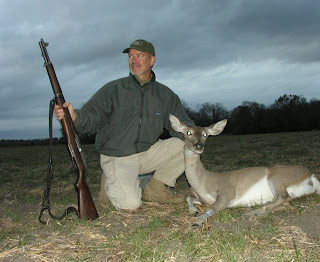 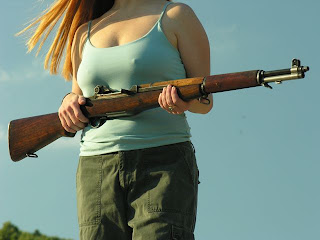