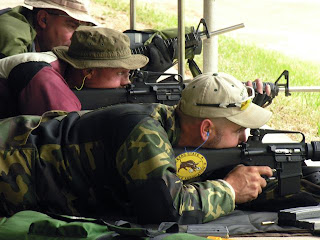 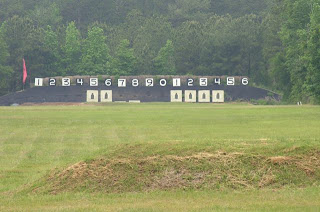 Infantry Trophy Targets standing up 600 yards away in the rain.
Most NRA Regionals start with a "team day" on Friday. Not everyone can make it but we have a crowd at Panola. 10 teams or so for a four-man 30 shot Presidents 100 team match and as many Infantry Trophy teams.
Team Blackfork won the IT and was second in the 4-man. Good shooting in spots though we struggled in I.T. with my rifle. Ended up shooting standing at 600 yards. I shot three rounds and had two hits. Rifle had extraction problems. Probably the old brass I was using.
Since the rain was blowing in and out we shot the entire IT match off the slab at 600 yards. Our winning score was 608. (Langham/Sepaugh/Alan Wilson) Our 4-man team score was 1123. Team Sabine, (Foster, Rynard, Nash, Stephens) won with an 1151.
Range capacity tomorrow for the 80 shot NRA Regional Match. Shooting my Match rifle.
Posted by Robert Langham at 7:16 PM 1 comment:

TSRA Mid-Range Video is up. 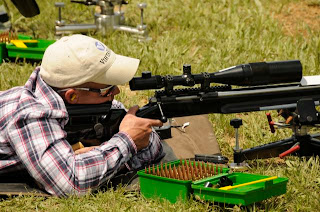 Hard to believe what a reversal of fortunes today represented. Santa Ana had destroyed the Alamo and put the garrison and leaders to the sword. His forces had captured and executed the largest and best equipped Texan army at Goliad. He was merely chasing the last rabble out of the state in back into the woodlands and swamps of the Eastern Texas coast. For all practical purposes the rebellion was over. Santa Ana was entertaining a local beauty, one of a series of conquests during his campaign, in his tent. Then the Texians swarmed across the pasture, into the camp and killing and scattering his army in 19 minutes.
The first news accounts must not have been believed. Disaster had turned into victory. Houston got Santa Ana in hand and forced him into sending orders to withdraw to Mexican troops in San Antonio and elsewhere and signed and agreement not to invade again. Houston sent him home via Washington DC. It took nearly a year and by the time Santa Ana got back to Mexico City his government had long since fallen and been replaced. He was in disgrace.
Amazing times when the rabble turned the tables on the Napolean of the West and won independence for Texas in 19 minutes on a muddy field near Buffalo Bayou.
Posted by Robert Langham at 1:25 PM 3 comments: 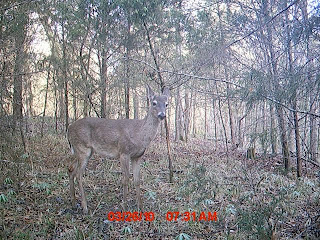 Little buck at the scrape. 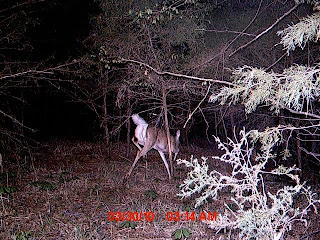 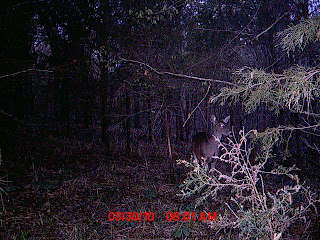 Doe at the scrape. 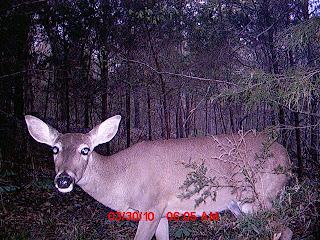 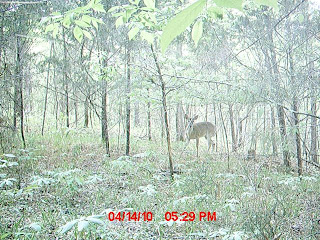 Crabapples up.
Got across the creek today to switch batteries and cards on the cams. Gotten jungle-y in there.
Posted by Robert Langham at 5:25 PM 1 comment: 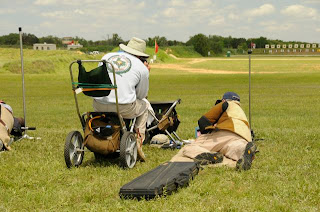 Dave Wilson scoring as Rick Crawford fires at 500 yards.
I was squadded on the same firing point as Dave Wilson and Rick Crawford. Very experienced competitors. It is always a learning experience to score them as they and shoot. Crawford shot an 1187X63 for third place overall in Iron sights. Beat most of the folks shooting scoped rifles off tripods, (though they do shoot at a smaller target). Dave was a little behind me. I'm reminded of what excellent people are in the sport and how fortunate we are to know them when I get a chance to spend a weekend shooting with folks like Dave and Rick.
Posted by Robert Langham at 6:39 PM 2 comments: 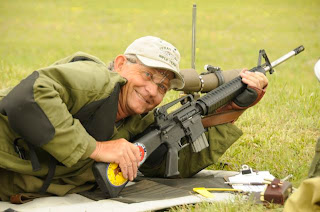 Smiling David Guthrie and his AR15. 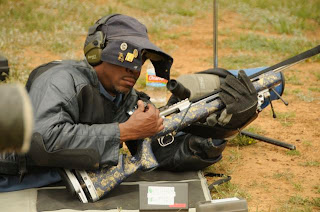 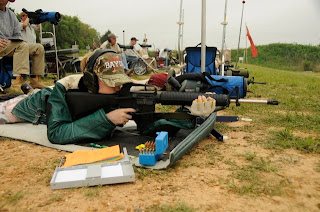 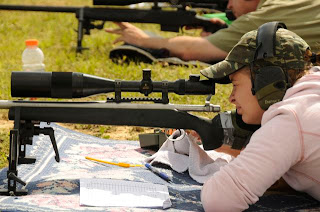 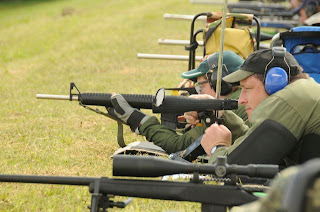 AR in the F-Class line. 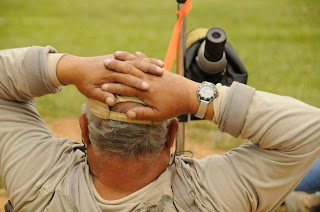 My favorite photo of Ray Diaz. 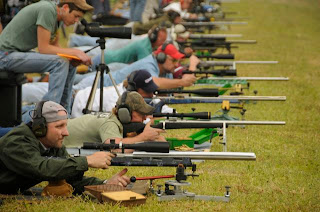 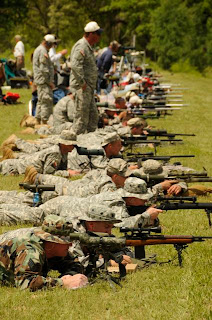 Guard shooters on day Saturday. We had them training with us for one day. 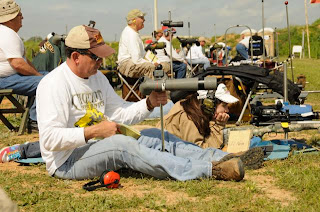 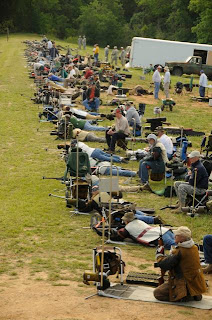 Firing line at 300. Ray Diaz and his M1A on the end.
Keith Stephens won the Iron Sight overall match with a 1193X73. 73 Xs out of 120 shots. Very well adminstered match as usually with Gaby and Crawford. David Mann was the F-Class Champion with a 1195X77.
Posted by Robert Langham at 6:09 PM 3 comments:

I'm running around like a headless chicken getting ready for a rifle match. Leave the house with the cat asleep deep in the coverlet of the bed. Return a hour later and she's still in there. Some beings know how to manage their lives.
If you aren't keeping up with Molly the barn owl you'll be shocked to see how big and gangly the kids have gotten. Quite a group. McGee brought home a rabbit the other night that wasn't dead and Molly had to get up and kill it on live streaming video. Rabbit was screaming and shrieking, as appropriate. Carlos cut the live feed and went to a slide show. Now the site has a warning banner on the top. In the chat room folks were shocked that owls ate.....meat. I guess they figured Californian Barn Owls were vegetarians.
Blank card on the dead cow cam yesterday. Unknown.
Posted by Robert Langham at 8:02 AM 2 comments:

Seemed like a lot until I figured out that I'd shot 743 round the last couple of months in competitions. The total includes a couple of 88 round matches by The Kid and a new shooter. Seemed like a lot of brass.
TSRA Mid Range Championship coming up this weekend. Two days at Camp Swift with match rifle and 80 Sierras at 300, 500 and 600 yards. Big crowd as usual.
Posted by Robert Langham at 6:03 AM 4 comments: 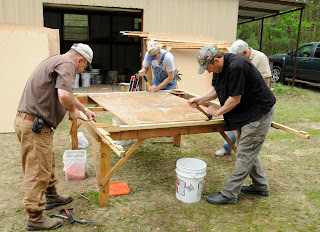 Karl Schultz and Randy Nash refacing targets.
Work day yesterday. New unshot targets this morning. They looked good standing up behind the berm. I chopped, cut and horsed brush all morning off the berm and back from the 600 yardline and the roadways. When I finished you couldn't tell a thing.
Shot myself silly with the match rifle. 192 standing, 200X8 sitting, disaster at 300, (shot a couple on Randy Nash's target next door), then a 197X6 at 600. Rifle really shoots. Utley won with a 783 out of an AR. Big crowd for the pre-regional monthly. A new guy came and shot my rifle. and ammo. Former Marine. He'll shoot better with more experience. I think he had a good time. Lots of crossfires, excessive, insufficient, misses, et. Unusual for Panola crowd. Perfect conditions.
Now I have two dirty rifles and the TSRA Mid-Range Championship is next week.
Posted by Robert Langham at 6:13 PM 3 comments:

Blue sky, green grass, black rifles, happy people. This is about half the crowd. 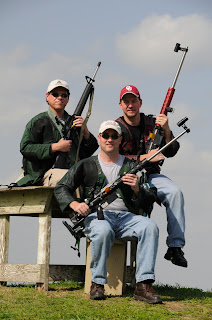 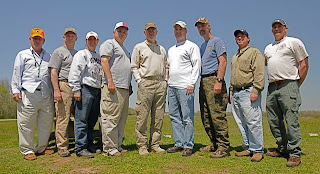 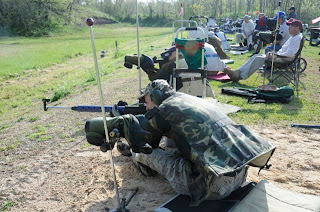 Bill Aten firing up the match rifle at 200 rapid.
Team day Friday, (Team Blackfork was second), Regional Match Sunday, (Keith Stephens won with a 790), and LEG Match on Sunday, (Tommy Laing Legged out). That's the highlights.
Posted by Robert Langham at 5:35 AM 2 comments: