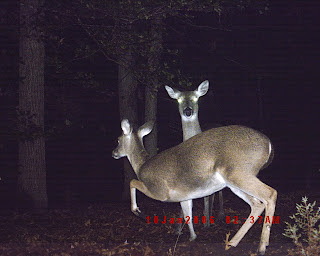 I run two deer cams all year- or I did until some thieving, lying, low-down snake stole one last month.  Now I run one.  I have/had Moultries because I could figure out the operating system.  Rednecks are a lot smarter than they might look- if they can figure out how to set up, retrieve and display the digital files off a deercam.
I use rechargeble batteries and swap memory cards.  The cards come home and get edited on the computer and the good ones saved.  Moultie uses one of my photos on their packaging.
When deer cams were film-based they weren't worth the trouble.  Since you only had 36 shots, every camera had elaborate picture delay schemes to keep from shooting 36 photos of three coons eating up all your camera corn.  For instance: cam would shoot three shots 30 seconds apart 40 seconds after it saw motion, then shut down for 10 minutes, then look again for motion.  Stoopid.  Now with digital, since I have 1207 photos or so on a 512 card, I could care less about 90 photos of raccoons pigging out.  Raccing out.  Cooning down.  Whatever.  Shoot away.  There will still be plenty of card space left when the next thing shows up.
All any hunter, from the first apes dropping rocks on warthog babies from the Baobab tree to todays rednecks, want to know is one thing: what is in the woods?  Big bucks?  No bucks?  Bigfoot?  Bears?  I've seen nearly every animal on my cams as I run them through the years.  Since I run year round I see the fawns, the does, the bucks dropping horns, growing them, sparring.  I saw the gaping wounds heal over a months time when we had a cougar in the area, plus all the butt-biting, ear scratching, knee-walking goofy stuff that animals do.
This afternoon we did a tomato/deer cam run.  138 photos.  Does and spotted fawns, birds, nothing, and raccoons.   Saved two.  Here's an example of does from last year.
UPDATE.  The first commenter gave me a great idea: How come I can't remotely detonate my deercams like a Titan II corkscrewing over Vandenburg?  That would fix those theft problems.  Seems like that system would be off-the-shelf and apply to lots of stealable items.
Posted by Robert Langham at 4:02 PM

I forget who makes the trail-cam (it might be Cuddeback), but if it gets stolen, the thief has to send it in to the company to "get the access code" in order to unlock it, but in actuality, the company send YOU back the trail-cam. However that hinges on whether or not you registered your trail-cam with them.

I just want one that I can remotely detonate, like a Titan II gone bad over Vandenburg, if I find it missing.

Tried cuddebacks. Expensive, and I can't figure out the operating system.