Katie and I are percolating coffee most mornings, so I am pulling out the few mugs I have.  You wouldn't guess it, for tasteless poor people, but we have strict esthetic standards when it comes to mugs.  We won't even put pencils in a mug that we don't adore and that has some vibrant personal history.

Plus I have a mental illness that exhibits the symptoms of overfilling coffee cups: 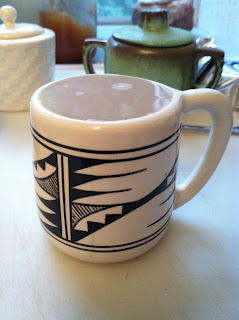 That's a cup bought at Saloman Ruin near Farmington about 30 years ago.  Or Mesa Verde maybe, but I really think Saloman.  Was just by there in August with the Jackon.

Here's the stack.  Still got all four though I had to glue one back together. 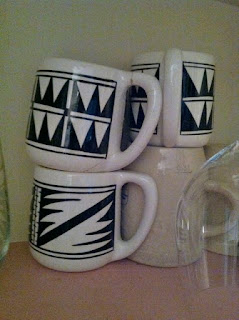 I was your normal idiot batchelor and furnishing my house. I've gotten the 30 years use out of them.  Still favorites.  The back one is resting on one of two Lufthansa mugs that my dad brought back from a trip to Europe in the 60s.  Holy smokes!

Cup looked so good I thought I would have a second cup out of the other pattern.  You break it: You glue it. 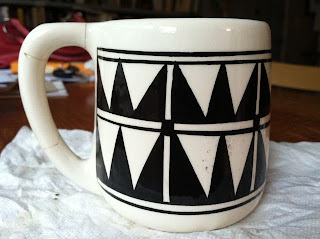 Next week we are going to Canyon de Chelly, Arizona so I am getting my pre-columbian face on.

FireKings!  If you don't have a restaurant-grade Oven Ware FireKing in your cupboard....what kind of American ARE you....really? 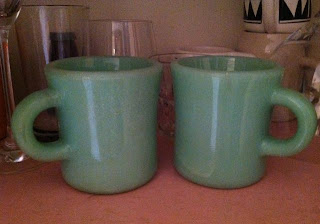 One of these is an Ebay and the other a garage sale rescue.  They are precious in God's sight.

When I was a kid we had a Frankhoma sugar bowl.  I looked for decades trying to find one for my house at estate sales, junk shops, et.  One day I thought about looking on Ebay where they turned out to be numerous and cheap.  Amazing.  The internet was invented so you can find all the old stuff you had when you were a kid: K22 pistols, Tiltall Tripods and Frankhoma sugar bowls.  Got the mug while I was at it.  In fact, I got a couple. 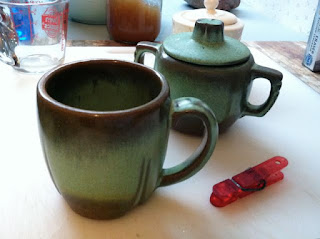 That's a vintage plastic clothes pin next to it.  What do YOU use as chip clips?  Something un-esthetic?  Please.

Lufthansas sitting in cabinet corner.  There were four.  Dad used them for years. ( I remember them on pre-dawn mornings in the hill country getting ready to go to the deerblinds.)   Used them since last century.  Nobody ever notices, but I think about dad fondly every time I fill one up.  Nearly worn the logo off. 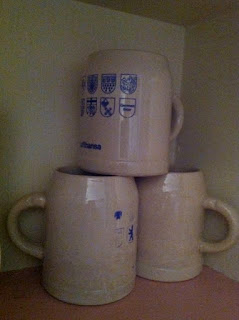 This rarely gets used but I keep it around.  Bought it years ago in California when I thought I might make my life there.  Yosemite.  You see folks on the old Sierra Club hikes with the wire handle under their belt.  I never did that.  It rattled around in the pack on several rock climbing and photographic trips but I never really used it much.  More an artifact than anything else.  Still, I hate to part with it.  Made some spectacular trips.  Pre-dates bottled water! 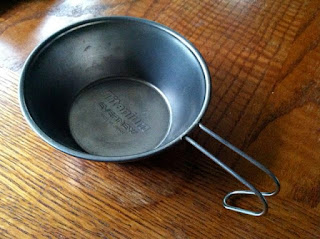 I'm the NRA and I keep my tools and CMP pens in a cup bought the first year I went to Camp Perry.  Rick Crawford and I actually stopped his truck on the range road and I ran in to buy this while we were loaded up and leaving. 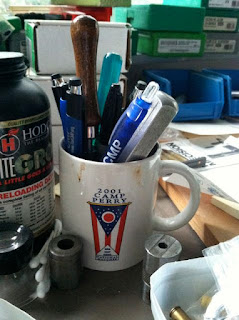 Posted by Robert Langham at 8:00 AM 2 comments:

Ancient folks sought out meteors because of their nickel and iron rich content.  This one was made into a budda carving with a swastika on his chest.  The Nazis actually collected it, just like Indy said they did.

The swastika graphic was used centuries before the Nazis picked it up.  I've seen it on Anasazi rock art in the American Southwest, so no particular shock there.

The inuit trekked over and cut chunks off a Greenland meteorite for years.
Posted by Robert Langham at 5:48 AM 1 comment:

You can't make this stuff up.  Everybody knows Bigfoot drinks beer, not hard liquor.
Posted by Robert Langham at 10:11 AM No comments:

Part of some poor soul blown apart.
Posted by Robert Langham at 5:51 AM 2 comments:

The News from the Islamic world:

Islam or modern civilization: pick one.
Posted by Robert Langham at 1:26 PM 2 comments: 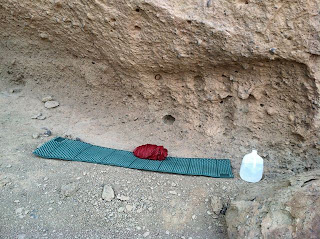 My little camp on the ledge.  Pad and water bottle.  Sleeping bag cover.  Boulder on right bottom corner had a little hole under it.

Probably booms and busts all the time in places with no people around to catch it and get it reported.  At Shiprock I tried to avoid packrat middens by sleeping out on more exposed places but it didn't work.  There was a rat under the one boulder near my sleeping spot on the Climbers ledge.  He kept visiting my camera pack all night after the ziplock of trailmix.  There have to be plenty in the cave, (one night there), where there is food, cover and water.  On my last night on a big exposed boulder on the South talus slope I had one who came and climbed around on my sleeping bag.  I could hardly shake him off.

Plus the dang kissing bug.

CMP Gold Medal from the LEG Match at Camp Perry. 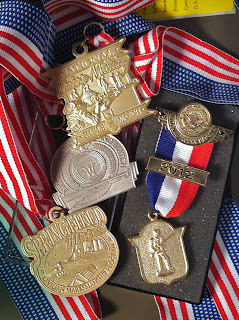 Always glad to get them, though I have a few.  My score of 484X11 was 35th out of 1125 competitors.  Won the EIC Senior Trophy for it.  Springfield Bolt rifle Match I got a gold and was 7th overall with a 287X6.  Garand was a disaster for a silver medal. ( 95th place), with a 278X6.  Vintage was 11th with a 286X6 for a gold.  4th in the Garand/Springfield/Vintage aggregate, but 10 points overall behind the winner.  Needed a score in the Garand but my standing offhand was awful with the old rifles.  90 and two 86s.  And that's what happens.

Texas Championship coming up next month at Terrell.  Get to shoot all the old rifles again plus M1 carbine and pistol.  We'll see.
Posted by Robert Langham at 6:56 PM 1 comment: 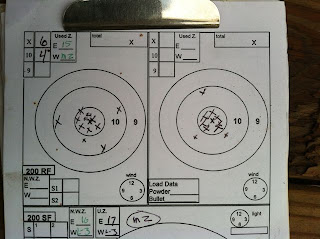 Hadn't touched my rifle since Perry.  Needed a little lube I think.  Alibis were the bolt not picking a round up on the second magazine.  Switched mags and had it happen again.  Pretty good set of mags, usually.