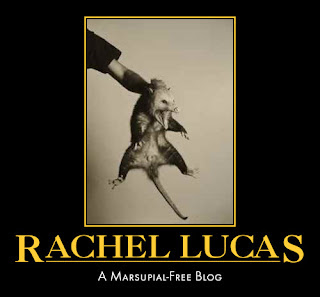 Rachel Lucas has been ranting about opossums and letting her hounds commit marsupialcide all over the central part of the State Of Texas.  All the opossums I meet are laid back, can hiss, fake death, climb trees and are generally a little embarrassed about that marsupial thing.
It's a little-known fact that possums don't have a very long life span.  2.5 years is about the max.
This is an image of a big male, (obviously, though his penis seems wired in backwards) possum held by my late nephew, Bobby Joe Langham.  Possums are all show.  If we had put a stick across those teeth it wouldn't bite down.  The gape is fake.
The males are big and blockheaded, the females built a lot lighter.  I catch them in live traps when I am reducing deercorn-eating coons at the lake.  We see them walk by the window here in town lugging the babies along.  They are about as dangerous as mallards.
Photo is from a show I did called the Blackfork Bestiary: Images of fellow Texans.  I think this particular photo is a palladium contact print from a 5X7 negative.  It's in several private collections and major museums.
Rachel, it may be a possum, but this image, matted, is 600.00.
Update for the Duck:  Most marsupials are pacifists, (now that the Aussie Marsupial Lion is extinct).  You might get a little boxing out of a kangaroo, but only if you are drunk.  My friend the Good Doctor Sneed had a dog that kept dragging a dead possum to the house.  The Doc would take the possum and pitch it over the back fence.  Two hours later Dusty would have brought the carcass back to the porch.  The Doc would go toss it, repeat, toss, repeat.  One day he looked out the window and Dusty and the possum were wrestling, then taking a break to eat dogfood and drink water.  Turns out the possum played dead ever time the door opened.  True story, from Sealy, Texas.
Posted by Robert Langham at 8:34 AM

Hmm, had a large one in Ohio come at my Rotti mix a few years ago, I intervened with a 2x4 & he bit down on it several times as I attempted to shove him off the porch, The railing was to low to shove him under & when I backed off he advanced, I smacked him, & finally got him off the porch, but he came back the next day, & cornered one of the cats, that night I finished him with a hydro shok