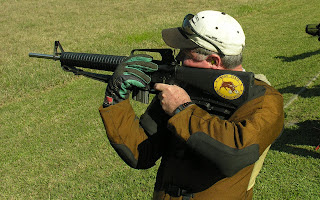 Today I went to the Longview Gun Club to zero Betsy, my newly-barreled AR15 just in time for tomorrows match at the Panola County Gun Club in Carthage, Texas.  The Christmas morning part was getting to go with Rick Crawford, TSRA Highpower Rifle Director.
We didn't just twist the elevation and windage knobs....Rick clamped a gauge on the barrel and moved the front sight assembly so that mechanical zero IS the no-wind zero.  When I line up the marks on the rear sight....it shoots in the middle unless the wind is blowing.
You can't believe what a big deal this is for a competitive shooter.  Sometimes at 600 yards you can get so much windage on that you get lost.  It's much easier to get lost if you have false windage already on to get to your no-wind zero.  It's best to START at mechanical zero and then put the wind on.
When I taught shooting for the Army, we would frequently have M16s with 1oo yard no-wind zeroes 16 clicks left, ( thats EIGHT minutes of angle in half-minute clicks), to put the bullets in the middle.  Or 8 clicks.  Or 12 clicks.  Or 23 clicks.  Crazy stuff.
When you can move the front sight assembly left and right, and you have someone who knows how to do it and built it to work that way, you set the rear sight in the center at mechanical zero, move the front sight to the right place, test-fire, fine tune, paint it, and go shoot the match.
Betsy, (named after Crocketts rifle at the Alamo), now has a new Douglas Stainless 1/7.7 twist barrel and is zeroed in the X ring at 200 yards with a six-clock hold on the standard NRA bullseye.  The previous barrel was dated June, 2002.  The throat was gauging 4 on the throat-erosion gauge.  She had been my Infantry Trophy, loaner and practice rifle for a while.
Rick Crawford is a great gunsmith, besides being the heart and soul of the Texas National Match Team and knows nearly everything there is to know about any rifle or pistol that matters.  He's worth about 100 bucks an hour on the range as gun guru.  We zeroed Betsy and another rebarreled AR and then test fired a 1936 Winchester 52E 22lr that he had rebarreled.  Plus he advised a guy on the next bench over who was shooting a nice CMP 1903 Springfield.
Christmas.
Posted by Robert Langham at 7:54 PM

What load do you use?

Load on a progressive or single stage press?

I load on a single stage. Most folks Dillonize.

Are you seeing any significant difference between rounds loaded on a single stage press vs. a Dillon?

I've always wondered if my 550 or 650 would be a hindrance for loading accurate rounds or I'd have to dust off the ole Rock Chunker....

Ive never used anything but my single stage Harrel Press. Lots of the competitve folks make ammo on progressives.

I don't really think of myself as a reloader....I just assemble ammo.