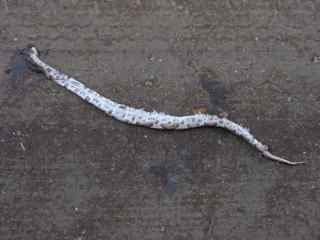 Dashing to the lake for a quick burn pile and deer cam run I passed this rolled out Southern Copperhead on the lake road.  Copperheads are usually in pairs so I got out and scanned the bar ditches.  Nothing.
I usually let them go by.  Lots of snakes in the ecosystem out here, and if they aren't in the yard or near a deerfeeder I give them a pass.  It's an adult thing- when I was a kid we hunted cottonmouths barefoot with .22s in the sandy swamp behind the dam and shot up anything without legs.  (except Hognosed snakes.   Those went home to be pets.)
Usually you could SMELL them.  I smelled a really rank cottonmouth at the creek crossing when I was checking deercam #2 recently.  Never saw him but he was very close.
Non-poisonous always get a pass.  Last season big Chicken Snakes were breeding in the boathouse.  Weird.  They were draped along every rafter and oar.  No, I wasn't mistaken in my identification, but I did stay the hell out of the boathouse for a week.
We have them in the target berm wall at Panola County Gun Club.  The general consensus is to leave them alone.
When I was a kid we used to spend a couple weeks at my uncles lakehouse on Lake Jacksonville.  All the cousins would rotate through.  A bunch of us were 10-13.  We swam, mostly, and boated around doing lake stuff.  At night we would watch for big fish under the light my uncle hung over the water at the end of the pier.
I don't think we used insect repellant once, though I can't remember being bitten.
They bought us trident frog-gigs, (probably a felony now) and we would snorkel around trying to skewer a perch.  Perfect summers.
My cousin and I were snorkeling along the shore in about three feet of water.  He was one of my cool cousins who I had been raised with early, then they moved to town.  I had the lake side and he had the shore side and we were looking for perch to jab.  All of a sudden he went thrashing and boiling away toward the grassy close-cut lawn shore.  I stood up and pushed my mask up on my head.  It actually looked like he was RUNNING on top of the water, like Jesus doing aerobics.  He made the lawn, about 20 yards away, turned around and shouted back to me "THERE'S A SNAKE OUT THERE!"
I eased my mask back down, sank below the surface and did a 360 on one toe, holding my little trident-tipped stick out, ready for action.  I think I fanned myself around using my ears.  There was nothing except gravel and some little clumps of lakeweed stretching out into green infinity.   I stood back up:  "Are you sure it was a snake?" I asked?
"Oh yeah" he reassured me.  "A BIG one!  You're right on top of it!"
I went back down for a couple of lung-busting rotations.  Nothing.  Minnows.  Dappled sunlight.  Gravel.   I was kind of in a silt cloud by then, so I rowed up current into clear water.
Nothing.  Two minnows zigg-zagging.
I gently pushed out toward shore and paddled in using ears and toes, ready to skewer any patch of scaly reptillian skin I saw.  When it got to be about a foot deep I stood up and walked to the grass.
We never spoke about it then or later and I never trusted my cousin again.
Posted by Robert Langham at 12:18 PM

"Well, sometimes we'd travel right down the Green River
To the abandoned old prison down by Adrie Hill,
Where the air smelled like snakes and we'd shoot with our pistols,
But empty pop bottles was all we would kill."


"The Bottomless Lake" was my first