This is the First Day of the Rest of Your Life. 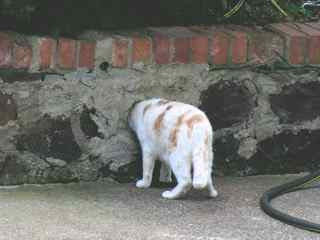 The Redhead is actually working while I goof off, though I must say, I'm attempting to goof off at an Olympic level.
Went to the range and shot 40 rounds, 20 sitting rapid and 20 standing.  At 200 yards.  Rick Crawford's gauge set the front sight assembly right on the X ring.  93 and 96 offhand.   Not so good, but that's a whole different skill set to hone.  National matches in a couple weeks.
Lunch with step-dad for his birthday.  He's a notorious check-grabber, so on his birthday, he bought his own lunch.  Go figure.
Back in the neighborhood both hawks were sitting on the steeple so I pulled out the Kowa 881 to have a 20-60 power look at them from Brady's Coffee.   Looked like a big sub-adult and the hen.  They were sitting on the arms of the cross and looking all over.  Those heads were really turning.    Every once in a while they both would spot the same thing and zoom in on it and bob their heads back and forth.   Cranked all the way to 60 power the Kowa got a little soft, but very crisp backed up to 50 power and below.  Lots of folks at the coffee shop got a look at the hawks.  Most people didn't know they were even around.
It's hot.  Hot bricks, hot sky, hot air.  I've been running a little to heat-harden myself for those 12 hour days in the sun at Camp Perry in two weeks.   Today is another day for running.
Posted by Robert Langham at 11:50 AM

I've been seeing the hawks. I watched one Sunday afternoon & his/her head was swiveling this way & that - kinda spooky. I was glad Maggie is a camouflauged cat.

And sweet Bob This just made me smile.

Camouflaged. I am not illiterate - I just forgot to preview.