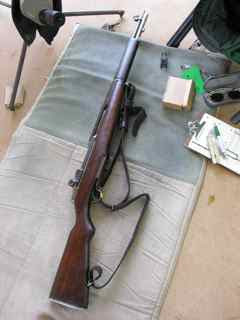 Met Alan at the Longview Gun Club and Range to shoot my National Match rifles and get the old ones squared away.  Early in the week at Camp Perry we will shoot the Presidents 100, the CMP/EIC Match, The Six-Man Bullseye Team Match, the Hearst Doubles and finally Infantry Trophy.  After Infantry Trophy on Friday I take my 1903A3 and head for Viale Range and the Springfield 03 Match which will be in progress.  Saturday morning we all get up, pack up the Garands and go shoot the Garand Match.  Saturday Afternoon I shoot the Vintage Rifle Match.  Sunday we shoot the M1A Match.  Lots of matches with wood-stocked firearms.
The course of fire for all these rifles is 30 rounds at 200 yards.  You fire five sighters, then shoot for score:  10 prone slowfire in ten minutes.  10 prone rapid fire in 90 seconds.  10 standing offhand in ten minutes.  The targets are pulled and marked after each slowfire shot or each rapid fire string.  Ammunition is issued.  Last year we shot Greek 30-06 HXP.  Good enough.
At the Longview range I sat down and shot my newly rebarrelled AR at 200 and 300 rapids, to check the zeros.  No warm-up.  Everything looks good at 200 and 300 yards.
Then I shot my 1936 Swiss K31 prone, shooting five shot strings at 200.  The last string was five Xs.  That Swiss rifle is an amazing firearm.  If it had a peepsight with adjustable windage on the back, folks would shoot them as service rifle guns.  I've won the Texas Championship with K31s the last two years but never shot Vintage Rifle at the Nationals.  Hope to shoot well.
Pulled out the 1943 1903A3 Springfield next and got the sling and sights set for 200 yards.  It shoots OK at 200.  Hard to keep them all in the ten ring.  I think I was 12th last year at Perry with my 03, and I had a very rushed prone rapid string when my stripper clip wouldn't strip.  285X6. (out of 300 possible)
Pulled out the  '43 Garand and it isn't shooting at all.
It doesn't gauge well, muzzle or throat, but I won the Texas Championship with it and was 55th last year at Perry with it.  (Still got the trigger weight tape on it in the photo) I don't know how, because it hardly holds the black.   I was off to 9:00 and clicked over one click and was out at 3:00 on the far other side of the black.  It shoots three touching holes in the nine ring and then moves somewhere else.  I meant to have it rebarrelled this year but now it's too late.
I have a couple of spare unfired Garands.  Might try and see how they group.  Prone at 200 you ought to be able to shoot 98-100 with a Garand.
At the National Garand Match last year if you shot 277 or above (the Gold medal level) they checked your Garand or 03 to make sure it was legal.  No bedding, no National Match parts.  We watched several folks get disqualified.  I got the impression that most of them didn't know the rules.
My Garand and 1903 are CMP guns, rack or field grade.  They still bleed cosmoline.  I shoot them in two matches a year and carried them deer hunting just to be perverse.
Posted by Robert Langham at 1:58 PM

I was planning on going to the Perry CMP events this year. I read the rules and then discovered the pesky little letters "NM" stamped on the barrel of my service grade Greek return M1. Drat! (On a more positive note, when I explained this to the Mrs. she said "so get another rifle".)

You might have the wrong rifle but sounds like you have the right woman.
I've got a Dane that came from the CMP bedded withmetal stips set around the floorplate so the trigger would lock up. It's a match rifle? Sheesh.