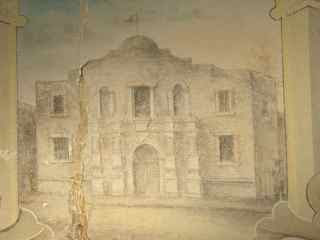 A sword from the Mexican Army that invaded Texas in 1836 is going to be auctioned.  There's speculation that it might have been used at the Alamo but I think that's really hard to confirm.  Pretty interesting to see this kind of stuff crop up.  Texas historians say they are surprised that something like this is just becoming known for the first time.
The painting above is part of a fresco found under layers of paint and wallpaper in a Tyler Mansion that was built in the 1880s.
UPDATE: Link with photo.
Posted by Robert Langham at 5:14 AM