An American Landscape for the Fourth of July 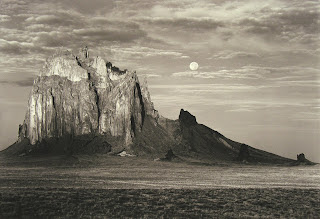 Shiprock is a volcanic plug that towers over the surrounding plains near the Four Corners region of the United States.  Regarded as a sacred site by the Navajo and Hopi, it's a spectacular and special part of the desert.  I shot this moonset with my 5X7 Deardorff on a piece of Kodak Tri-X one cold morning in the Fall of 2001.
I'm of mixed emotions this Independence Day.  The Bill of Rights is vandalized by people sworn to protect it.  Two dangerously flawed candidates stand for president.  Both parties have pledged allegiance to their own power and growing the bureacracy.  Four of the nine Supremes can't read plain English and the other five are just as bad on other days.
I'm trying to concentrate on what I love about this land:  The American Idea that all would be equal in front of the law.  That humans were created with inalienable rights.  That Freedom and Liberty mattered.
And the wonderful miraculous landscape.  Soaring.  All round.   From sea to shining sea.
Happy Independence Day  to patriots on the web.
Posted by Robert Langham at 7:55 PM

I really enjoy your photography.

Yeah, yeah. Link me, you Texian Neanderthals, so I can join the Axis of Redneckistan.

I believe that is done, sir!

Great pics Robert. Came to your site from Tam. Guy