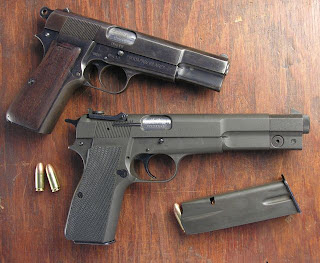 An unusual target Highpower.  This one has been worked over by Cylinder and Slide for accuracy and trigger pull.  I put the Uncle Mike Grips on.  It had Pacs.  It's a nice pistol.  Not quite accurate enough to shoot Centerfire pistol in Bullseye.
I like Browning Highpowers and have owned several.  That's my car gun, an old Buenos Aires 1961 FN Police Contract gun on top.  Under 200.00 at a gun show a few years back.  I bet those police shot a box of ammo a day.  Rabid dogs, sullen crowds of peasants, traffic control.  Lots of wear on that pistol.  It has tiny old-style fixed sights and shoots left.  At 25 yards you have to hold the 9:00 edge of the black on a 25 yard Bullseye target.  It's nearly reliable.  Both pistols mysteriously have lost their magazine safeties.
Posted by Robert Langham at 3:19 PM

For some reason all hipowers shoot to the left. Makes you kinda wonder if it was an intentional defect or something, like the magazine safety.