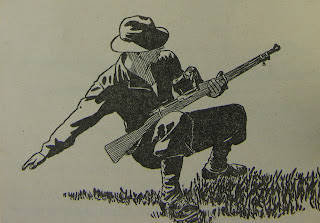 National and Regional Ranking
I'm number 87.  Without a bullet.
In 2007 I won the Texas State Service Rifle Championship.  I enjoyed that as much as anything I ever accomplished in my whole life.  I made a POINT to enjoy it, reminding people on firing lines, lunch lines and deer blinds exactly WHO the 2007 State Service Rifle Champion WAS.  (Plus the State Garand Champion, and the Vintage Rifle repeat Champion, if I couldn't get proper deference.)
I don't think I even got a free cup of coffee.  LaRue Tactical wouldn't send a free hat.  I asked my girlfriend at least once a month: "Who is the State Service Rifle Champion?"  She'd always give me a pat and say, "You are, honey, you are."
Full disclosure:  when nobody was around, I was as likely to lecture the cat about who was and who wasn't the Texas State Service Rifle Champion.  (It's not JUST opposable thumbs and being hairball-free, you know.)
Foolishness aside, it's more like the championship wins you rather than you winning the championship.  Certainly was glad to be good enough and lucky enough, (on the same day) to win it once.
I notice Justin Utley, my TSRA teammate is up in the teens.  He's 22 or so with the future in front of his front sight.  He, (#17) is going to remind me, (#87) that I suck, and I am now a FORMER State Service Rifle Champion.
This weekend we start gearing up for Camp Perry and the National Matches.
Posted by Robert Langham at 12:11 PM