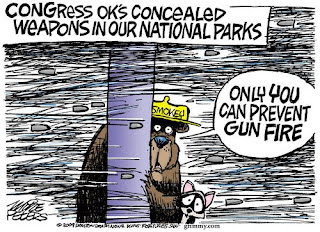 I read the Dallas Morning News often.  It's kind of like dropping by the tarpit to take a look at the last Mastadon before it goes under.  They may be stinky, hairy, smelly, excrement-producing machines but I'm going to kind of miss 'em when they are gone.
Today's hysteria by Dayton Daily News Mike Peters is a prime example of why I have mixed feelings.  He's a Pulitzer Prize winning political columnist, (which tells you more about the Pulitzer than Peters at this point) and today he is commenting on guns in the National Parks.
In liberal America, when you restore the right of self defense to folks, the blood ALWAYS runs, the bullets ALWAYS fly and it's ALWAYS a return to the Wild, Wild West.   Or vigilantism.  Maybe racism if you can find too much or not enough melanin.
Never mind that the only places where blood runs and bullets fly are gun-free utopias like DC, LA and Chicago.   Never mind that some reasonably decent Democrats, (Ann Richards), who bought this bunk were exiled to the wastelands over unclear thinking.  Never mind that nobody can point to one instance of gun laws reducing violence can be found.  Instead, let's just be hysterical, shall we?
Thanks Mike Peters of the Dayton Daily News.  Here's your sign.
Posted by Robert Langham at 10:36 AM

Emotions sell better than facts. How dare we ever let good solid factual information over ride, or get in the way of some tree huger/animal rights individual(s) emotional agenda (personal or as a collective group)

I won Leg points once in San Antonio when she was Governor. They talked up all about the Governor's Twenty Etc at the match and how we'd get a letter from the Governor and all that; as a matter of tradition you see.

Never heard squat from her on the matter. She snubbed everyone in the competitive shooting community.

Wouldn't use the term decent myself when referring to Ole Vodka Voice!

You're probably right. And if you don't "get" gun rights.....then what rights do you truly understand?

You know the saying goes, You're as good as the best you've ever done.

With that in mind, there were a lot of great shots this past weekend weren't there? Not just Keith, who really raised the bar for agg score, but even the rest, the guys like you who didn't win it, but have won it, and the guys who, though they screwed up some, if you looked down that line at any given moment, there were a lot of 10s and Xs. Flyers yeah, but by and large that was a strong line of well aimed shots. Great example on Memorial weekend, and wasn't the backup sound of machine gun fire a rich addition to the Star Spangle Banner in the morning?

Fine times all in all.