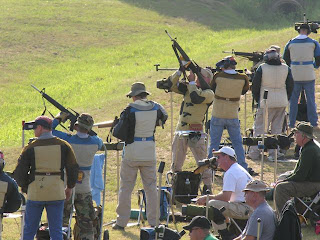 Biggest Highpower match in the country outside Camp Perry. 97 shooters.  Six LEGs given in the EIC match.  The Service Rifle Championship is as big.  The Midrange trophy match is almost as large.  The Panola County Gun Club NRA Regional at Carthage, Texas the first weekend of May maxes out at 64 every year with stand-bys.
This is a big deal.  I think the success of the TSRA Highpower Rifle program can be laid at the feet of TSRA Match Directors Rick Crawford, Dave Wilson and Ken Gaby.  They do an incredible job of organizing the matches and representing the interests of shooters with the TSRA.  We get a lot of support because they fight for it.  Ken got quite a table full of door prizes this year from Shillen, Sierra, LaRue tactical and more.  I won five boxes of Sierra bullets (my choice) with free shipping in a drawing and that wasn't the biggest prize by far.
Don't be a freeloader.  Support the Texas State Rifle Association!
Hard to believe I have 100 videos up on the Blackfork6 Channel on Youtube.  The latest is a short piece about Mark Woodard finishing his Distinguished Rifleman's Badge at Camp Swift during the Texas State Rifle Association Highpower Rifle Championship.
More movies than Cecil B. DeMille.  More gunfire than Quentin Tarantino.  Less dialog than Quest for Fire.
The LEG match at the Panola NRA May Regional was rained out so TSRA Directors Ken Gaby and Rick Crawford rolled it over to the Sunday of the Championship.
50 shots.  No sighters.
Nice shooting and congrats to Mark Woodard!
Update:  Just added more video of the awards and scores to Mark's video.
Update II"  Second day of Highpower Championship up.  Looks like I am past the significance of 100 videos and back in the work-a-day world.  101.  In a larger note I THINK I just learned how to put captions on movies.  There will be no end of trouble over this.
Posted by Robert Langham at 4:17 PM