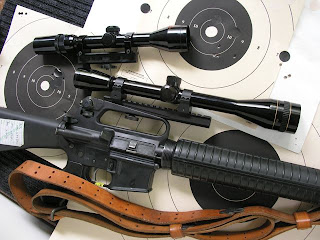 Midway see-through, extended, Weaver mount, all-aluminum rail on the AR with my Leupold 16X Target scope.  Is this cool, fast and cheap...or what?  Equally cool and borrowed, though not as precise, scope and mount on top.
All over the country, thousands of times a day.  Some folks may fret or worry over it, but for me and others it's just like a mysterious bearded man in red bringing you what you WANT.
Like magic.  Like fairies.  (I guess..)  From a mysterious workshop far to the North.....wonderful gifts.
In the mailbox today, early, (like all real gifts), for 13.00 including shipping AND an NRA round-up to support the gun-terror that grips this nation:  a Weaver rail adaptor for the carry handle on my AR.  Kind of makes a chin-gun out of the AR but I can overcome with a little bench technique.  This is just to check group size, not a permanent mount.
I'm going to take both ARs out and shoot 80 grain Sierras at 500 yards with a this scope and a dead-calm day.  See what the group size looks like.
Cheap as heck from Old Saint Mid, or borrowed from a friend for free.  I love Texas.
Gosh, suppose the government, who hates gun stuff and capitalism....worked HALF as well as Midway....it would be a wonderful-er world!
Update:  No shooting today though it would be perfect.  Crawfish Boil and voting instead.  Pulled the brass from yesterday out of the tumbler.  Sure have some flat primers on the 80 grain cases....
Update II: Thi is a six inch Leapers.  6.49.
Posted by Robert Langham at 8:41 AM

Is that the Model 1 mount (product 837970)? If so, then it is presently out-of-stock at Midway. My experience is that sometimes the cheap mounts work better than the high dollar items. I would be interested to hear from you as to whether it is remaining tight and holding true. Thanks.

I'll find out soon. Sure fits nice with a big lock-down screw.

thoughts on a .22LR conversion kit??

I'm looking at Model 1 upper with the Black Dog mags....

my .223 ammo's getting too damn hard to replace and for 95% of the shooting I do, the LR will work just fine for practice....

Catfish: I've got a DPMS .22 conversion upper. The magazines are hard as hens teeth to find though. Functions well. You might consider that .22 LR is getting almost as hard to find as .223 Remington. As for simple conversion kits that use your existing barrel and replace the bolt carrier group and magazine, be advised that they are ammunition sensitive as far as function goes. They also are using a 1 in 8 twist barrel when a different twist rate is needed for .22 LR. HTH

Your comment "Gosh, suppose the government, who hates gun stuff and capitalism....worked HALF as well as Midway" was right on the money. The Gov't. ceased to care about the customer/citizen a long time ago.
Lazarus Long