The Fleas come back to Lindsey Lane. 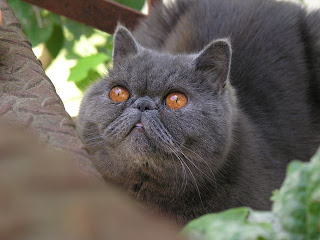 We have a little grey persian who is the best cat, (of some pretty good cats) that I have ever lived with.  I comb her several times a day when she jumps in my lap at the computer.  I use a comb with wire metal teeth, close set, that combs out dirt, hair and even fleas.  In the height of the flea season I can kill ten a day off her head and neck.  It's very satisfying and keeps them from ever getting a foothold.
The local numerous squirrel population is the source.  She's an inside-outside cat.
By the first of the year I usually have the fleas totally wiped out, and as none are breeding outside, she gets a few months of flea-free life.  The last flea came off in late February.
I keep combing through the non-flea months.  She likes it and it cuts down on the shed hair.  I've combed off enough fur to stuff a sofa off this little eight pound cat.
Yesterday I killed the first flea of the year with the comb.  It's the Spring Fleaquinox!
I don't know what you do to celebrate the Fleaquinox.  Just hunting and killing fleas is fun enough.
Update: So far just the one.
Posted by Robert Langham at 9:17 AM

I suggest you get some Frontline or Advantage for your cat. I've used both on my cats, and they work great.

She doesn't have a flea problem. I kill em as soon as she brings them in and she gets a good combing in the process. Good for everyone.