Scores held up in Garand, 1903 and Vintage Military. 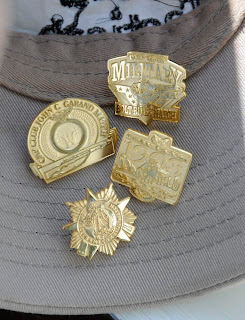 I missed the second day of shooting because of Justin and Kim Utley's wedding. Shot all the matches on Saturday. Long slog. Looks like I ended up with the top scores in Garand, Vintage and Springfield 1903 Bolt Rifle. Got gold CMP medals for shooting top national scores with all four rifles, but Ron Leraas shot a 365 with his M1 Carbine and beat my 360.
I've won the Garand twice now and the Vintage four or five times. Never won the Springfield1903 Championship before. Been second with an M1 Carbine several times but only for a Silver Medal score. Fun matches. The National Match Director Rick Crawford, Dave Wilson and Alan Wilson ran the matches and Terrell Rifle and Pistol Club hosted them. Much fun.

IBM M1 Carbine ran well. I just shot a couple of sevens. Stayed in the aiming black all the way with the Garand for a 290. Shot better than that with my Swiss K31 but ruined the score by crossfiring next door for a 281. Shot a medium 282 with the 1903A3 Springfield. Garand had quit feeding but started right back when I tightened the loose gas plug.
Posted by Robert Langham at 8:33 AM

Ah, cross firing, it does ruin one's day - you call a shot good, and then notice it isn't the correct target.

Really shot offhand well. Started with a seven, high, then everything clustered around the Xring, including the one next door, except for one more nine. Was shooting with a pistol bullseye stuck to my glasses.