Got to wander the gunshow for both days at no charge with camera casually slung around my neck. I was the "official" photographer. Did manage to pull a ladder out of the back and take some overhead "big" scene shots. Big crowd. Lots of people.

I did shoot a bajillion files of TSRA folks and events. Might post a few but ought to let my client have the first krackatoa at those. Got to actually hold four Olympic Medals, which was kind of neat. Saw Jay Novochek, the Dallas Cowboy tight end. Convention and meetings full of wonderful gun-owning people who keep the rest of us actually SAFER from oppression by...well, those folks who would oppress and deny human rights. Kind of funny. The government goes on and on about protecting and preserving the Constitution, but we have to fight them tooth and nail or they will regulate it...pretty much to where it is now. As much as we love the LEOs...basically they are muscle for the big bureaucracies. Weird. But the TSRA ACTUALLY PROTECTS AND PRESERVES GUN RIGHTS. You a member? 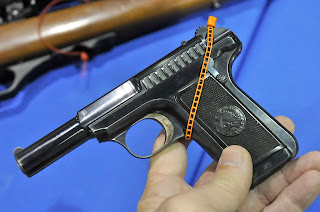 Tamaliscous Savage .32 from a century plus back. Not for sale, the guy was just showing it off. He wouldn't speculate as to what the price might be if he was going to sell it. 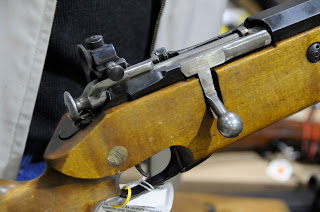 Mosin target rifle. All the normal Mosin mag and machinery are in this stock. Looks like the bolt might be modified. 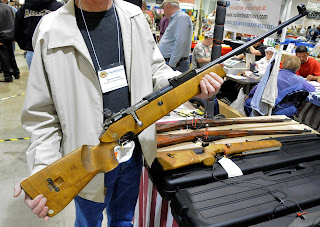 Not shown, it seemed to have another handstop/possible-sling-rail on the left side of the forearm. Might have been a biathon ski gun. I've never even suspected that this gun existed and they had two of them. Can you imagine shooting 7.62X54R in a match? Real Men. Comrades! 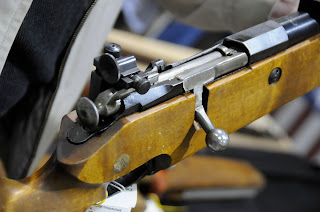 700.00/ The rear sights looked liked commie beavers had gnawed out the stock and put them on. Surely they shot the gunsmiths and sent the assistants on Vaclav's most excellent Siberian vacation.

Only thing I bought was a 3.50 cent Apricot fried pie that was worth 2.75. I did get chased off a used book table when I got engrossed in an account of the Finns and Soviets in the snow in WWII.

If you aren't a TSRA member, just keep in mind that gun rights in Texas need your support. Put a little money where your heart is. Everything that has gotten done in the last 30 years concerning Texas gun rights has been done by the TSRA. Nobody else, not the Statehouse folks down in Austin, the vast bureaucracies, the feds, the LEOs or anyone else is doing anything except whittling away at us.

Update: Alan Wilson won a gun safe. That was kind of impressive. Katie won a 50.00 certificate to Bass Pro Shop.
Posted by Robert Langham at 12:05 PM

Blackfork:
A late family friend fought the Russians in the Russo-Finnish War.
He was an American but Finnish in extraction. Went to help out
the mother country.

Fought for a month as a machine gunner running a Lahti-Salorata light MG.

I think he was issued a
Browning HP as a pistol. So long
afterward it was hard for him to tell but the BHP looked most like it to him.

He told me that was enough combat for him and the war ended then anyway. He didn't stay for "The Continuation War."

Later he was in the Coastal Artillery in the U.S. Army. He lost most of the sight in one eye when a gun blew up.

Ocean going sailor after the war.
Fanatic ice fisherman after he
retired.

Good guy, missed by all of us.

That rifle is a Finnish Mosin target rifle used for training and competition.

The target rifle is a Finnish Mosin Nagant model 28/76. I have one- the peep sights make it a very accurate shooter. It was the last upgrade they made for the 7.62x54r round just before the 1980's- after that they joined the 7.62x51 NATO round with the TKIV 85 aka "Tak 85", of which none I know of have ever made it to American shores. The $700 price tag on this one would make it sell quick nowadays. Only I think 700 M28/76 made it into they country and it seems everyone wants one & no one is selling. The bent bolt on it is to scope it, but I enjoy it's unique peep sights far to much to put glass on her- plus the proper Sako scope mounts are fetching ~$400. these days... D: