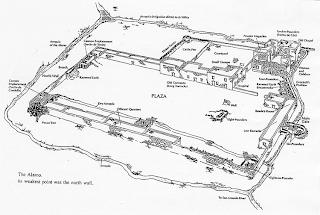 128 folks left in the Alamo and one of them plays the bagpipes.  What are the odds?  Scottsman John McGregor and Crockett entertain the troops with fiddle and bags.  The Mexican Army has a bugle and drum corps as well as a band.
The Texicans were up until early morning hours burning huts, then trying to warm up and get some rest around campfires.  Now that the blue norther has blown in, it's 39 degrees and they realize the need for firewood.  And water.  The Mexicans are trying to divert the irrigation canal the fort has been using.  There is a well inside but the water isn't as good or reliable.  Men are digging it deeper.
When they sally to the northwest out of the cattle pens the soldatos maneuver against them.  Snipers with British Baker Rifles try to get position.  The Bakers are good to 270 yards or so.  Serious business.  The rebels are driven in but more Mexicans are killed and wounded than in the La Villita attack yesterday.
After yesterday and last nights shoot and burnout the Matamoros Battalion set up an entrenched camp in La Villita and is picketing the open land East of the Alamo.  A small battery dug in overnight north across the river and is beating on a crumbly North wall.
The batteries have to be moved after dark to avoid Texican gunfire which is deadly out to 200 yards.  They dig all night and then keep to cover during daylight hours.  The .36 caliber long rifles from Tennessee and Kentucky are picking away at the unwary.  The South wall under the watchful eyes of Crockett's men is getting a reputation.
Two companies of soldiers under General Castrillon are sent closer to check the ground and  Texicans catch them in the open and kill 30.  Picking.
As darkness falls the defenders come out again, this time to the Southwest toward the river and the Potero bridge to burn houses and collect wood and water.  Col. Juan Bringas attacks, loses a man shot dead, falls off the bridge into the water and is rescued by happenstance.
The rebels range out to the Nueva Street intersection beyond the Matamoros positions in La Villita burning houses.  The same distance would have taken them to their favorite saloons downtown.
Overnight the North battery moves again, closer.
The garrison is waiting on relief.  Fannin and the best Texican force are at Goliad, 90 miles east.  Houston is trying to stay sober long enough to hammer out a declaration of independence at Washington-on-the-Brazos with parts of an army.  Gonzales should be riding to the rescue.  Santa Anna was early but now everyone has the word.  All they have to do is wait.  Help has got to be just a day or two away.
The Mexicans are getting units, supplies, people up the road every day and sorting themselves out.
It's Friday, February 26, 1836.
Update: Bowie had his men, Travis has a company, Crockett brought a hunting party, there are locals.  Two companies calling themselves the New Orleans Greys are in the house.  They have been here since the expulsion of Cos, Santa Anna's brother in law from the town a couple months ago.  Good folks.  Brought their own cannons.  They fly their flag over the Long Barracks.
Posted by Robert Langham at 9:29 AM