There and back again.

Jon Rhynard was going up so I thought I would take a day and go sit in a stand with a rifle as well. Frantic day on Thursday with my HP printer dying, Ebay shipping piling up and a big print to deliver. Got it nearly all done with Katie's support and hit the road to Clarksville. I set the cruise control and kept reminding myself to calm down, though I was driving slightly faster than my normal velocity. Into a stand after 5:00 and then sat for more than an hour as absolutely nothing happened. At dark two little bucks came out of the treeline and warily circled the feeder with an eye on each other. We aren't shooting little bucks. 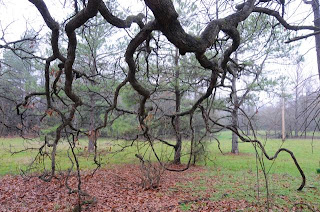 Oak and grapevine at the old house site.

The next morning I sat in a tower new to me, watching a well-used feeder. There had been a steady overnight rain but the blind was tight and dry. Nothing showed and at 10:00 I got out and took a little stroll around the ridgeline. This must be the highest point on the property, though that's pretty subtle. Found a buck skull with empty antler sockets. RIP late April last year. The feeder had run dry, so that might have been a clue to the lack of interest. At the road something caught my eye and I got out the 5X7 Deardorff for a couple of negatives. Nice to work a real camera. Landscape and road were wet and the sky was pearly: beautiful combination for black and white film.
During the mid-day I bought three sacks of corn for the feeder, (29.00: thank you, Obama and Bush for making the ethanol producers happy instead of me), photographed an impressive old tin barn-roof next door, (from the top of my 4-runner), ate, recharged and headed back to the stand I started in. Sat through the afternoon texting and surfing via Iphone. Just about the time I was ready to quit I did a final sweep and happened to fixate on a little spot in the trees just a deer stepped into it. Odd how often that happens. First one, then three, then five or so. I put down the binocs and picked up the Remington. I had sorted out the biggest through the binocs so I followed her with the scope. They were just under 100 yards so I wanted a clean headshot to avoid tracking in the dark and a messy butchering later. I put a 130 grain Sierra GameKing under her eye and waited a few minutes for the group to clear the field. When I drove the 4-runner down a few minutes later a little six point came out of the treeline, following the earlier bunch. He crossed right in front of me and didn't seem to register the car as he strained to sort out tang of blood in the air. 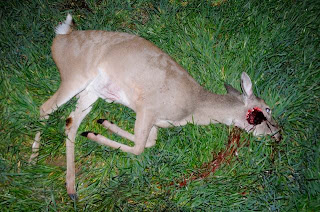 Grisly business, even for the apex predators.

Rolled the doe into a cooler and got her to the house. Jon helped me get her on the rack and did the paperwork while I got the knives going in the dark. Was just going to clean-out and hang overnight but Allen called and informed us that the morning would run about 22 degrees. I weighed that against the 40-with-no-wind we were experiencing and headed back out with my blades to get her skinned and prepped to travel. 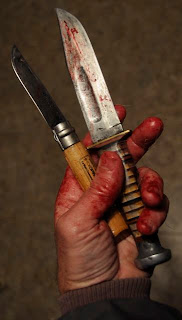 Home again just before lunch, a day late. Got the new printer working on all three computers and started kicking out ebay packages. Made the mail.

Update: Absolutely stunning light yesterday and this morning. Sunlight slanted in early against a grey stormfront coming in. Quite a lightshow.
Posted by Robert Langham at 3:37 PM

I have loved those "cheap French fruit-pickers" for years. Opinels take and hold a great edge... and nobody gets too bent out of shape about a wood-handled folder!!

You might be eligible for a complimentary Apple iPhone 7.