Anyone that shoots anything is my friend....though when Joe Runnels called me and wanted a little adult supervision while deer rifle zero-checking two weeks before season I was trepidatious....the line would be packed with those folks who shoot once or twice....once or twice a year.

Sure enough, it was standing room only at 31 West Range on the 100 yard rifle range.  MANY families with an assortment of rifles, from British sporterized WWII .303s to AR clones, all intent on zeroing in for the opening day of deer season.  Bored kids were poking around in the gravel for brass, wives standing around while hubby fiddled.  Bad scopes, lousy technique and a lot of windage and elevation knobs being cranked the wrong ways.  I'm happy that people shoot but amazed that many deer get killed.

I put up two 25 yard pistol bulls-eyes, one over the other at 100 yards and we started sorting out the three or four pretty good rifles that Joe keeps on call.  No problems: all his guns started off on the paper out of a nice Lead Sled rifle rest that he had along.  We even clicked over an AR with a little 4 power mil-spec knock off on it.  I used the standard loud voice to turn the line on and off and clear rifles while we were downrange but even then the guy next to us fiddled with his Mossberg while folks were in front of him.  I know everyone is excited but it gets scary.  Need to stand away from the open and empty rifles while folks are downrange, period. 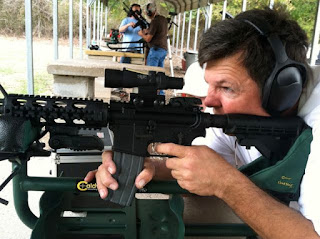 Runnels on the AR.

Brought my Ruger #1 and Remington 700 .308 to shoot cold bore shots and see if the zeros were where I left them last year.  They were.  Cold bore first shot checks are very much like what will happen in a deer blind- you won't be shooting a warm-ed up gun.  I won't clean them now until after the season.  Both of them were top of the X-ring at 100 yards with my handloads.  I'll wipe the fingerprints off now and them but that's it.  They are both in camo socks so they won't attract an eye in the brush.  I'm such a skinny guy that I can hide behind them. 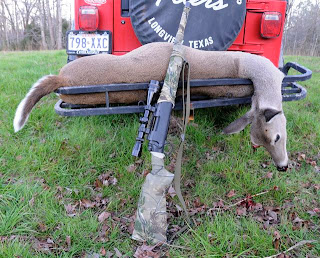 Remington .308 with a doetag from last year.  Under the sock is a Gander Mountain cheek rest I built up to get good head position.  Joe sold me this rifle last year and it is set up to shoot pretty well.

Finished up by shooting a little 25 yard bullseye .22 with my old Ruger #1.  There's a pistol LEG match next weekend after the Garand/Vintage/Springfield/Carbine matches at Terrell.  My Les Baer and box are loaned out to James Pennington in Minnesota.  Going to have to borrow a pistol.   I needed the practice.  I hadn't shot a round of bullseye pistol since I legged out at Terrell with my pistol last year. 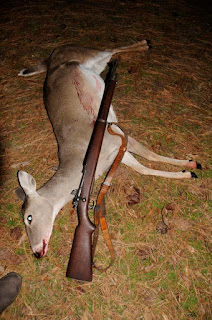 Beware old men with old rifles.  This rifle won the TSRA Springfield Championship once and the CMP Springfield SENIOR trophy at Camp Perry last year. ( I know:  Handicapped parking, but still, they have to give it to somebody!)  Its a great pleasure to carry and shoot.  1969 Lake City FMJs do the trick. 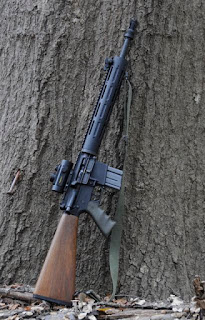 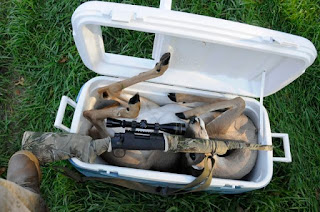 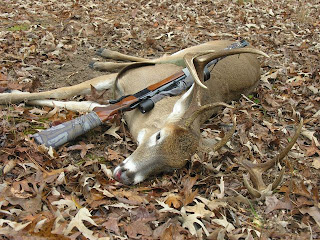 Last buck I killed with Ruger #1.  God only knows how many deer have been killed with this little 7X57. 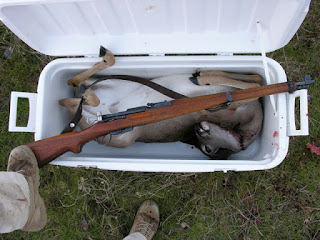 Nice write-up. I'm an old guy too with an old rifle. Love it.

One question: Why the does in the cooler, whole and with hides? In my country we dress and skin, then a cooler maybe, depending on outside temperature.

That's one of the reasons I dont' take the kids to the range unless they're shooting too.

I'm looking forward to finishing the rebuild of my Springfield. It's a hoot to shoot. And every time I see that Swiss rifle of yours, I get all covetous.

Just out of curiosity, what handguards are those on that AR with the wooden stock? I'm doing a build for a 20 inch rifle, and those look like what I'm looking for.

I think those are LaRue handguards on the AR, though they may be Yankee Hills. Sent the upper off somewhere to get the barrel floated.

I use the cooler to load deer into back of my 4-runner and not get blood all over. I can load it myself. With out it, its hard to get deer in and you get blood everywhere.

Those K-31's are too nice to expose to the weather and deer-hunting. They sure do shoot too!