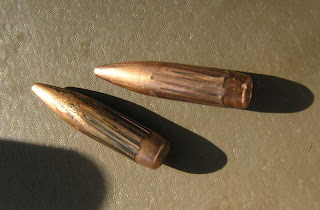 Here's the stuck 77 grain Sierra Matchkings.  Probably could load and shoot them again.
My suppressor is loud, or louder than you might hope, with my normal .223 match loads.  You could go without earmuff while shooting, but it's marginal.
I looked on the Hogden site and found a subsonic load: 3.1 grains of Titegroup and a 55 grain bullet.  I tried 3.1 grains of Titegroup under a Nosler 69.  It works, doesn't cycle the rifle but it's quiet.  The gun kind of rattles a bit when it goes off.  Kind of a beefed up .22lr.  About six inches under the zero for my normal ammo.
Learning.  Going to try 3.4 and a 77 Sierra Matchking.  Might go sonic.
Could have killed a roaming dog, one of three, graveyard dead today, with the suppressed AR. Had the red dot centered up and first stage of the trigger gone.  It's lake policy to shoot strays, since we get so many dumped dogs.  Three in this group, but I couldn't bring myself to break the trigger.  Let him go.  Perhaps they will move on.  They were looking for deer to run but I don't think the deer are in much danger.
Update: 3.4 Titegroup stuck two 77s in the barrel after shooting one out.  77s have more bearing surface than the 69 Hornadys.  (More power!)  Got on the web for stuck bullet advice and found plenty.  Used Kroil and a fiberglass rod to drive the bullets out the muzzle without much problem.  Learning.
Posted by Robert Langham at 7:31 PM

I always enjoy reading your blog. I am new to reloading, but it's my understanding that Titegroup is a pistol powder... I guess if Hodgdon says it's OK, then it's OK... I'd be nervous loading up a rifle case with pistol ammo, but it looks like you had success in doing so.

What in the world is wrong with a .22 conversion unit? It's bound to cycle more reliably than subsonic .223

Nothing wrong with conversion kit. Would work. Suppressor also going on a 10/22, so that's going to be done. Just trying to learn.

Dock: Amen. it IS a pistol powder. They list it. Seems you can't reduce most rifle powder loads far enough to go subsonic without running risks of detonation rather than burn because of large exposed powder surface inside the case.

Instead of Titegroup why don't you try some Trailboss. I've seen guys on THR use it for subsonic 308 loads.