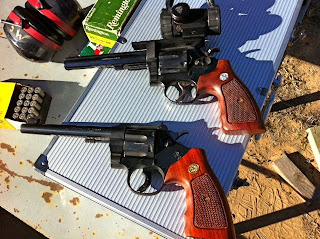 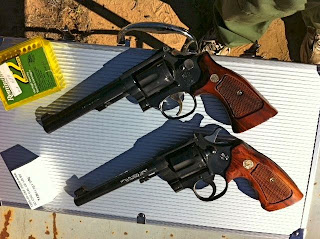 Most folks who know me realize my love of shooting many types of firearms and my sometimes insatiable desire to do side by side testing to determine, at least in my own mind, what works best in a variety of categories. Function/reliability, accuracy, practicality, value for the money, appearance, pride of ownership and "shootability" are usually a few of the things I form opinions on during my evaluations. Of course, these are "my" opinions and like Ford vrs Chevy, others will obviously have a favorite.

I am fortunate to have a friend with a great collection of firearms who is more than happy to loan me anything in his collection in order to do these "unofficial" personal evaluations. I enjoy getting to experience all these different firearms and sharing with others what I find through these reports. I'm not a professional writer but I hope these reports are informative and serve to entertain. I try to "tell it like it is"...sometimes with my favorites not coming out on top in all categories. Oh well, that's part of the fun!

This eval deals with a decades old debate about old classic target revolvers. The Colt Officer's Model Target in both .22 rimfire and .38 Special vrs the Smith & Wesson model 17-4 "K-22 Masterpiece" and model 14-4 "K-38 Masterpiece."  All four of these revolvers had 6" barrels and were in excellent shape. All were very handsome with beautiful blued finishes. In these days of polymer framed hi-cap autos, it was nice to handle these great wheelguns made of steel and wood. I enjoy revolvers every bit as much as autoloaders, especially quality brands such as these.

I gathered several types of ammo and headed for a private range. Range time is hard to come by so I had to shoot on a day with gusty southwest winds. I really wanted to shoot "freehanded" but the wind was so high nothing would have been relevant. Therefore all accuracy testing was from sandbags at 25 yards on the B-8 target. Even from the bench, the pesky winds made it difficult to wring the most accuracy out of these revolvers and I'm afraid my tests have an amount of error in them. I tried to hold steady but, it was really tough. I would have loved to have been able to evaluate some double-action shooting too. Since learning to shoot DA, it's really pretty effective with a properly tuned action. Briefly trying the DA mode on these four revolvers quickly revealed only the K-22's action was smooth enough to render accurate DA shooting.

I started the testing from the bench with the .22 revolvers. I noted both had cylinders with recessed chambers. Cylinder diameter on the Colt was 1.552" and 1.445" on the S&W. Weights were 42 ounces on the Colt and 43 oz on the S&W. The Colt's barrel was plain and had a more pronounced taper measuring .574" dia at the muzzle. The S&W had a less obvious taper and a solid rib on top, ending with a muzzle dia of .593". Although their weights were almost the same, The Colt's weight was mostly toward the rear. The S&W's was more muzzle heavy, leading to a steadier hold. Again, this is my opinion and I believe this would be a factor If firing without support. The Colt's front sight is about 1/10" wide and used for elevation changes by changing sight blades of various heights. The S&W's front sight is fixed and wider, being about 1/8" wide. Both have just about the right amount of gap on each side when aligned with the rear notch. The Colt's rear sight is adjustable for just windage and the S&W's has both windage and elevation adjustments. I was happy with either sight picture. Kinda nice not having to deal with those horrible but popular 3-dot sights!

Now to the shooting. I grabbed what was handy on the shelf and took four different types. Remington .22 standard velocity 40gr solid ( CMP surplus, 1984 vintage), CCI Blazer .22LR High Vel 40gr solid, Winchester Hi-vel 37gr hollow-point and Remington 36gr Hi-vel HP I shot two 5-shot groups with each type from sandbags and averaged the group sizes. I've had better days to shoot and feel like both revolvers have the potential factor to deliver better performance in calmer conditions. The Colt's trigger was a bit harder than the sweet trigger of the K-22. The Colt's overall average was 2.40" and the S&W averaged 2.37" overall with the four ammo types....a dead heat. If the Colt's trigger had been smoother, it might have edged out the S&W in accuracy from the bench. I feel the S&W would hold an advantage if shot unsupported due to it's muzzle heavy feel....wonder if some folks would refer to this as better "balanced"...an old term I've heard all my life that, in my opinion, equates to "how good it feels in their hand." I could warm up to either revolver and probably shoot either to good effect but gotta give the nod to the sweet K-22....due to "better balance."

Next came the .38 calibres. Again, the Colt had a plain barrel with an elegant taper to a muzzle dia of .568" and the S&W again had a solid rib barrel, less tapered with a muzzle dia of .640". Cylinder dia on the Colt was 1.552" and 1.452 on the S&W. Neither cylinder was counterbored. The cylinder on the Colt was a tighter fit for one of my handloads using cast bullets sized to .358". They had to be seated in the cylinder with a firm push. Obviously the Colt's chambers were tighter. An old retired Officer with my department had mentioned his Colt Trooper had this same issue when he carried it on duty while the issued S&W's did not. The tight chambers could be an advantage in the accuracy department but for a combat gun it would worry me if I had to perform a quick reload from a speedloader. The Colt weighed 38 oz. The S&W had a red dot optic sight mounted and weighed 49 oz with the addition of that gizmo in place of the rear sight. This time the Colt had the sweeter trigger although I didn't care at all for the trigger shoe that was in place. The S&W's trigger felt really heavy & gritty, like a brand new, not broken in trigger. Very unlike most S&W triggers. It surely could benefit greatly from a trigger job! Even from the bench, the S&W trigger was difficult to deal with and not "pull" shots. The optic sight worked OK, not sure one could say this was a fair test since the Colt had standard iron sights.

I chose five types of ammo, again firing from sandbags on the B-8 target @ 25 yards. My home cast Lee 148gr wadcutter over 3.0grs of Bullseye, the Remington 148gr HBWC over 3.0grs of Bullseye, another load using the Rem 148gr HBWC over 3.2grs of W231, the old standard .38 Special 158gr RNL (Remington factory load) and another Remington factory load, the 130gr FMC military loading. The most accurate load in both revolvers was the 148gr HBWC over the 3.0grs of Bullseye with the best 5-shot group of 1" recorded by the S&W K-38 when I was able to get five consistent trigger pulls. Overall though, the Colt averaged 2.094" and the S&W came in at 2.434"....advantage Colt, from the bench. With equal triggers I think the S&W would make up the difference if shot offhand due to more weight toward the muzzle. The Colt is a fine revolver and a hoot to shoot though. I liked both of them!

Final impressions: Both brands had their advantages. Both are obviously high quality and beautiful revolvers. I'll readily admit I'm a big S&W fan but the Colts may well edge them out in mechanical accuracy with all having equal sighting systems and smooth triggers. I've read Colt uses a different twist rate in their barrels and the old timers believed they held an accuracy advantage over the S&W...very well may be true! The Colt .38's barrel had 6 narrow lands & grooves with a LH twist. The S&W .38's barrel was a 5-groove RH twist with much wider lands. Can't say which holds an advantage, both worked.  I've also read the Colt's required a lot of tuning by someone who really understood them to arrive at a great trigger pull. I've shot an 8" Python in the past that had a fine trigger pull so, I know the Colt triggers can be improved. Neither of these two examples were particularly bad but both could have been better. The .38 Colt's trigger was much better than the .22 version. The K-22 S&W was just a sweetheart to shoot with an excellent trigger. Sadly, the K-38's trigger put it at a big disadvantage but, this can easily be fixed. I did try a few offhand shots in the wind to try to gain a feel for how all four of these revolvers would perform without a sandbag rest. All were fun but it is my belief and opinion, the S&W's hold the advantage here with their muzzle heavy feel compared to the light/whippy barrels of the Colts. Others may have a different opinion....Ford and Chevy thing, again.
As always, I welcome everyone's opinions and comments.
Wallace

Posted by Robert Langham at 3:56 PM

I prefer the old Colts, but as you said it DOES take someone that knows Colts to really smooth them out like a Python trigger. Re accuracy, Colts do tend to be 'tighter', which theoretically would make them more accurate. In all honestly, I think either Colt or S&W are actually more accurate than we are as shooters!!!