Day One: The Mexicans March in. 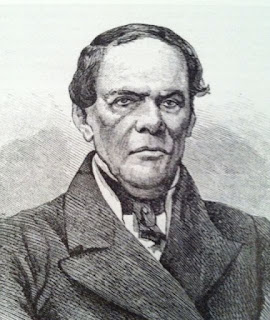 
Rumors had flown for weeks about when Santa Anna and the Mexican Army might arrive.  Travis and Bowie figured no earlier than mid-March.  When the Texicans struggled out of their hangovers mid-morning Tuesday they found the city streets full of activity- people were packing and leaving.

The Mexicans were reported to be at Leon Creek, eight miles from town.  Travis still thought it unlikely but he posted a lookout in the bell tower of San Fernando Church on the main plaza.  Just after noon the bell rang but when Travis and others climbed the tower there was nothing in sight.  Travis sent John Smith and Dr. Sutherland out to investigate and they ride into mounted cavalry a mile and a half from town.

The Texicans, families and followers retreated to the Alamo, driving some cattle down Potero (now Commerce), street and grabbing all the provisions they could carry.  A few linger to raise a two-starred flag, (Texas and Coahilua), in the military plaza.  Beginning at about 3:00 the Mexican cavalry begins to arrive unit by unit.  They raise a blood red flag with skull and crossbones on the church bell tower and salute the arrival of Santa Anna and his guard with a cannon shot from the military plaza.  Seeing the flag and hearing the shot Travis fires the biggest cannon in the garrison, an 18 pounder.  Bowie sends Green Jameson with a letter to meet with the Mexicans.  Crockett and others come through the gates.

Mexican Army units continue to march in and defenders filter into the fort through the night.

Update:  Santa Anna and his army crossed the Rio Grande at Laredo in 15 inches of snow in the middle of a harsh journey.  Several troopers-recruits from tropical Yucatan, died of exposure.  Commanches raided the army all the way up scalping a number of soldiers and stealing supplies cached ahead.  The wagons were driven by contract drivers who operated independently causing many delays.  A large contingent of the soldiers families trailed the army along with various camp followers.

Update II:  Dr. Sutherland's horse slipped and fell on him in the mud coming back from spotting the Mexican Cavalry.  The fall injured his knee and broke his rifle in half at the breech.  Travis sends him and John Smith on to Gonzales, (90 miles East) to spread the word.

Update III:  The Esparza family decides to go into the Alamo and arrives at dark.  All the gates are barred.  The father, Enrique has brought chairs and they climb up one by one, (over a cannon) and enter through a high window in the back of the chapel.

Update IV:  Around midnight Texicans, who know every back alley and outhouse in town, steal six mules and capture a soldato.

Posted by Robert Langham at 8:02 PM