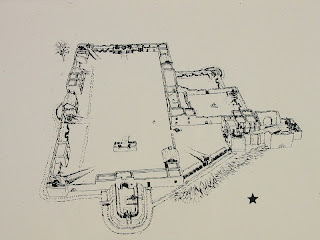 South view over the fortified main gate.  Crockett and his men along the low palisade with treetops on the ground outside it.  18 pounder on the left lower corner.  Downtown to the left.  North wall at the top.  Chapel on the right.

Dawn comes with the North wind still whistling at 39 degrees.  Everyone is a windburnt and strung out from waiting and watching for relief and news.  The men are stretched thin to cover the walls so sleep is only done at your post.  The Mexican artillery is lobbing shells in and pounding on the walls.  You have to watch yourself in the open plaza.   Men are digging handy trenches and policing up the scraps for anything useful.  Nearly everyone can identify various Mexican cannons by the shrapnel left behind.  The north gunners must be bored.  They shoot a brass ball, then an iron one, then another brass.  Martial arts.

In town Santa Anna's quartermasters and cooks are hustling around trying to find supplies to feed the troops.  They packed light on the trip up, for speed and now everyone is hungry.  The town has been stripped of everything the citizens haven't hidden.  Patrols go to the local ranchos to find cattle, pigs, corn.  Anything.  Might have to eat those shoes.

The Texicans are cooking beef and conserving firewood.  128 fighting men burn through a couple of cows a day, especially in this cold wind, plus corn and beans.  Folks are getting creative around the cookfires as the salt, peppers and vegetable remmnants run out.  Not very fancy cuisine.  Everyone is trying to find a new part of a steer to eat, but it's the same old parts.  The hides are going to make sandbags and barriers to fortify the Long Barracks rooms.

Quite a bit of speculation about how to defend if the Mexicans get inside.

A few housecats lurking around the old mission.  They're eating scraps or hunting mice around the walled compound.  Couple of them are tame enough to pet.  Wash Cottle says he knows how to make cathead soup.  God help us.  Knowing Wash, he might.

Plenty of jokes about wellwater, beans and going downtown to have a drink.  "The whiskey may be gone," quips Crockett, "but at least our bagpipe player is sober."

When that damn Fannin rides in he better have a bottle.

Quite a few stiff bodies on the ground outside.  The East picket searched some when he went out after midnight, passed the weapons back over the wall and then stood one up against a tree as a joke.  His arm is up and he looks like he's waving.  The Tennesseans joke about shooting the cooks first, next time.  Steal their dang spoons and salt.

Several men coming back across the ditch last night with armfuls of firewood and scroungings when Green Jameson fell.  Mexican balls were popping on the wall and everyone was running hunched over but Esparza leaned back out and hissed, "Verde! Don't drop those onions!"  Cracked us up.

Couple guys snagged Mexican Besses and shakos when they burning huts.  They insist on wearing them and being addressed as "commandante."  The muskets aren't much.  One of the hats has a .61 caliber hole in it.  They were shooting at each other in the dark.

The Mexicans are moving batteries closer.  The sappers are digging all night.  The Generalissimo decides the La Villita battery wasn't moved enough and they have to move it up in the daylight.  The rifles pick a few and punch holes in a few more.  One guy shoots a chicken off a post in Plaza Valera and everyone gives him hell about it.  He retorts he's not going to share it when he gets it tonight.

The irrigation ditch is finally diverted.  It's all well water now.

Someone counts the lead bullets and comes up with 19,000+ rounds, but the powder supply is worrisome.

It's Saturday, February 27th, 1836.
Night falls and the menu is seared beef and tortillas under the 18 pounder platform or two choices of stew and beans in the chapel.  You can get it to go.

Posted by Robert Langham at 3:08 AM