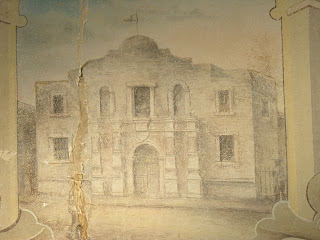 Today and this evening in San Antonio, 173 years ago, the Texican rebels holding San Antonio threw a big fandango, (drunk and dance) celebrating the birthday of George Washington.  Most of the rebels were staying in San Antonio and few in the Alamo Mission itself.  By all accounts it was a hell of a party.  Crockett, Travis, Bowie and lots of folks from distant places.
Santa Anna had dispatched a cavalry unit to attack the town in the early hours of the 23rd, but rain, muddy roads and a swollen Medina River held them up.  They would have caught the Texicans sleeping it off.
The next day there was a rumor that Santa Anna himself attended the fandango to spy on the rebels.
It was a Monday, in 1836.
Posted by Robert Langham at 1:19 PM

I forget where I read that, but yes, supposedly Villa was there. Good thing the weather held up the Mexicans, otherwise the Alamo story might have been completely different!