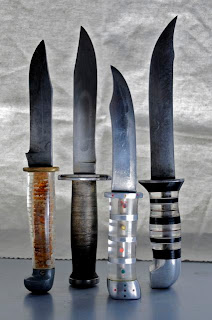 Theater-made knives are probably from the Pacific, where many more knives were made than Europe. Produced by SeaBees and Navy for trade to the soldiers for Japanese trophies. Europe had many more trade items, the Pacific almost none before the armed forces arrived.

Clear acrylic was kind of a new and unusual material. The story usually is that all the glass is from Japanese Zero windshields. Could be any plane. Leather washer handles replaced because they would rot. Once that got started, the sky was the limit.

Fun to collect, carry and use. I've cut up and skinned deer with most of mine. Ebay is full of them.
Posted by Robert Langham at 7:41 PM

My grandfather was in the SeaBees and he brought back two knives with handles like the knife on the right.

I've stayed away from those on Ebay, because there are a lot of fakes, and I can't tell the difference until it's too late.