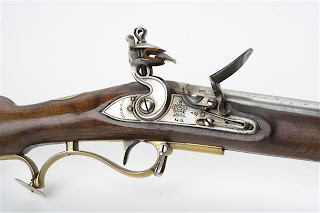 
They ain't coming. Bonham rode in two days ago with the news. We can quit straining our eyes to the Southwest. Every post is talking it over. Nobody understands why they aren't coming and the little knots of men are trying to decide what to do. Stay or try to get out.

I've noticed fellows going down to the pen to look at their horse and gear. Maybe we will all make a run for it. Galls everyone, for true. I'd like to hear, one of these days, a good reason for hanging us out like this.

Word spreads that Travis wants to talk to the fort at dusk. We leave a man at each corner and walk down the end of the Long Barracks near the chapel to an area that the Mexican cannons don't reach.

We've never been all together in one place before. The Greys and the Tennesseans. The fresh bunch from Gonzales scattered around. The locals from town. Teague and King and the Parson. Crockett. Travis. Bowie wrapped in a blanket in a chair with the Brujita Candaleria behind him. Dickinson. Bonham. Archer. Milsap. Everyone has his rifle. Handshakes and low greetings all around.

Gives you a little shiver. I'm proud to stand among these rough armed folk. They came up here with fancy flags a-waving but so far, we've turned them back.

We crowd a little closer and Travis lays it out. Fannin isn't coming. Doesn't know why. That doesn't mean nobody is coming and we can expect some to trickle in. He has sent word out and gotten word in reply, expects to send and hear more. Nobody has to stay. He knows we have families and duties. He's staying but that's just for him. No dishonor in leaving and there will be another time to fight. Doesn't think the Mexicans will spend what it takes to root us out but they might. He knows everyone has had time to talk it over and now we need to know. He's short and to the point. Before I realize he takes out his sword and draws a line in front of us.

There's just a quiet moment and the flag on top of the Long Barracks flops a couple of times. Then we realize he's waiting. Linen shirt glows in the dark. Shining sword in hand.

Crockett and Holland walk over without speaking. Some of his boys a step behind. I hear someone say "come on, Bull," and the Greys all cross. Quiet. Just a crunch and a squeak. I see the Parson's tall hat.

From our wall we face into town across the river but to the far North right there's a treeline that has been picking up a trace of green. An old pear up there has bloomed out white the last few days and I've been thinking about walking past that white tree into the grey woods. I believe I could get to that white pear a little past two on a quiet night and be gone as smoke before the sun came up. Maybe with a few others. Tie some rags on the horse's feet. Shoot and scatter if they raised an alarm.

But instead King and I shift our rifles and walk over. In a minute it's settled. Only Bowie and Candeleria and one other shadow standing back. Moses Rose.

Bowie sits. It's dead silent until he says plainly, "how about a hand here?" and three men rush over to pick his chair up and carry it across as we make a space. Candelaria brushes past me anger radiating off her like a hot stove. I get a chill and a picture: "she'll outlive us all."

And just like that it was decided. Men walk back toward their posts. Everyone seems easier. King and I tread back to our hole trailing young Kellogg. Teague says, "how about a bite of that cold beef?" 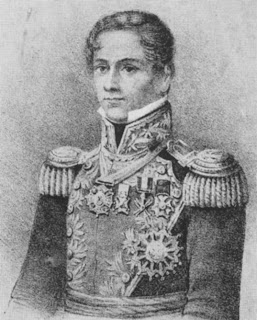 Santa Anna at age 35
Based on the information given by the women the decision is made.  The attack will come in the early morning hours tomorrow March 6.  The weather has abated.  It's about 50 degrees.
The batteries are ordered to step up their rate of fire.  It's possible that the La Villita battery is merged into the East side Potero street guns.  The batteries have fired for several days to keep the defenders awake.
The attack will be made in the early morning hours before dawn.  The assault will be split into four columns of about 1000 men each.  1500 will attack from the north making the total 4500.
General (Ramirez y) Sesma is either ill or declines and the attack from the town side will be lead by the British adviser Col. Adrian Woll.  Ladders, crowbars and axes are distributed.  Mexican units stood down at twilight.  The soldiers will be marched out and in place by 5:00am.  The commanders will enforce noise discipline during the march.
The Mexican General staff rides around the fort for one more look at the ground.
It's Friday, March 5, 1836.
The garrison received one courier.  No help was coming.  There seemed to have been discussion about surrendering or escaping.  Travis assembled the men and gave a speech outlining the situation.  Several accounts have him drawing a line in the sand with his sword and asking those who will stay to cross over.  Everyone except Bowie, who is on his cot, and Moses Rose cross.  Bowie asks to be carried across the line.  Rose decides to take his chances over the wall after dark.
Travis writes until nearly midnight and sends a last set of dispatches and letters with 16-year old Jim Allen, riding bareback.
Update:  Moses Rose has picked a good time.  As the Mexican units stand down and go to bed early the town seems empty.  Rose walks out along the dark river.
Update II:  Bowie and Crockett talk privately for a long time after Travis speaks.
Update III:  Tapley Holland, a 26-year old man from Grimes County was the first to cross the sword line.  My maternal Grandmothers maiden name was Holland.  My brother's name was Holland Irwin Langham, from an old family name.  My daughters middle name is Holland.  Tapley Holland is an artilleryist, one of six children in a family who came as a settler in Austin's "Old Three Hundred."  This is our relative.
Update IV:  At twilight the artillery fire dwindles, then ceases.
Posted by Robert Langham at 7:42 PM