Whilst awaiting my turn @ the barber shoppe I was perusin' a Field & Steam rag and read what I thought was an interesting article.
Tx PWD conducted a survey on which was more effective, lead or steel shot for dove hunters.
TPWD conducted this survey over 3 years ( I think that's what it said) with one observer going out w/one hunter to count the hits & misses and record the ranges.
Neither shooter or observer knew whether they were using steel or lead (shells were "color coded" & otherwise unmarked) 12 gauge.
Lead loads were  1 1/8oz  #7 1/2 shot @ 1200fps
Steel loads were  1oz  #7size steel @1300fps (dunno much about steel shot sizes...assuming #7 steel is deemed good for doves?)
Both loads had similar recoil so, shooter not supposed to be able to tell difference.
Article claims both loads killed about the same w/the steel load achieving 5% more hits ( I think due to shooters error in frequently not leading bird enuff w/slower lead load)
As a group, this bunch of shooters (forget how many there were but, quite a few) killed one bird for every 4.4 shells expended  (22.7%)
National average was one bird killed for every 7.5 shells ( 13.3% ) according to this article.
As a group they missed shots over 30 yards 68% of the time.
As a group they missed shots under 30 yards 57% of the time.
Average "kill" distance was 29 yards.
Now, here's what I found pretty interesting.
Shooters used their own shotguns & had their choice as to what choke they used.
48.1% used "Modified" choke ......21% kill percentage
30.5% used "Imp Cyl" choke.........26% kill percentage
21.4% used "Full" choke ..............16% kill percentage
Note the 5% increase for each step down in choke constriction.
Kinda shows what I've been saying/thinking all these years...."Most guys would do better with a more open choke & also not shoot at birds out of range."
Many years ago I read something that's always stuck with me & I believe it to be pretty close to the truth.
"You can tell a greenhorn wingshooter 'cause he'll always shoot too long a barrel, too tight a choke, too big shot and high brass shotshells."
I've observed this very thing over the years!
Typical rookie will say "I want a 30" barrel and full choke! High brass #6's work best! Them little ole #8's won't even kill a hummingbird."
Well, somewhere in the middle probably lies a pretty good compromise.
Rarely have I ever felt the need for a Full choke and I'd only use #6's if that's all I had....I've had pretty good success killing ducks w/#6's!
Another old saying that I've always remembered is "Pattern fails before penetration" ....Checked mourning doves killed @ 40yds & a #8 will go all the way thru sometimes.
Yep, a #6 will shore-nuff kill a dove "IF" your pattern doesn't let him fly thru without a hit....see little need for #6 unless looong shots w/full choke & your are able to hit at distance.
As for me, I much prefer #7 1/2 as my "do all" shot size with #8's in the smaller gauges and earlier season, especially on the smaller mourning doves.
Whitewings are bigger & tuffer so it's # 7 1/2's for them too. ( This goes for the Eurasian Collared doves too).
Steel vrs Lead.....gimme the lead every time!!!!  Surely hope the gubmint don't force us to use steel on doves like they did ducks....I'd be bad mad!
Everyone has their favorites I'm sure....and, there are always exceptions...shooter skill (or, lack thereof) can certainly change these stats...just found this article very interesting!
As always, I'd like to hear everyone's opinions!
Posted by Robert Langham at 2:55 PM 3 comments:

Daily Deercam: Not much shaking.

It must be over. 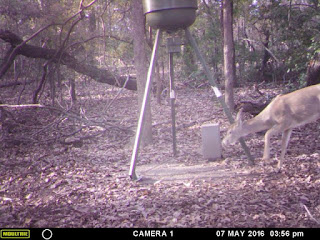 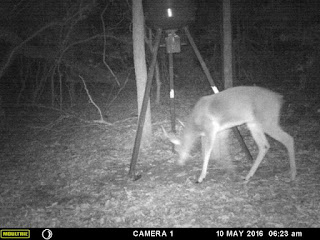 The rest were rabbits, squirrels and raccoons.

Can't get the date set on the cam, nor get the feeder working, so there is only corn when the coons or I shake it out a bit.  Still there is a little traffic. 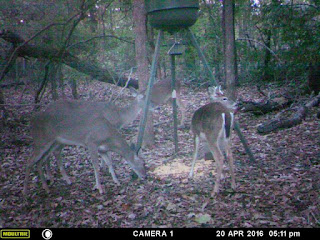 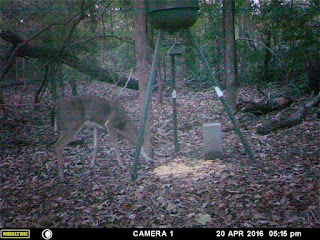 Not legal but he is cute and reliable.  Wonder where last years versions are? 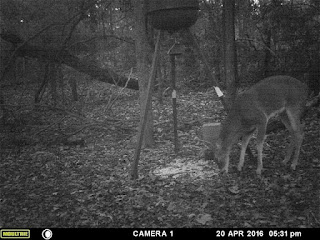 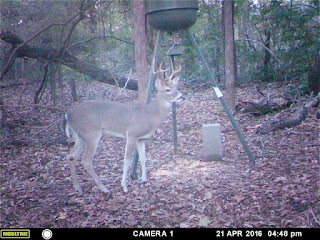 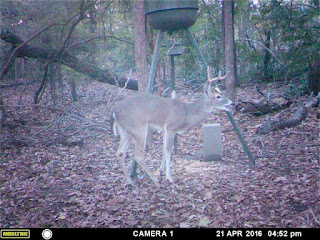 Creatures of the Earth.

Flint and slate points in Bowhead Whale.
Posted by Robert Langham at 7:49 AM 1 comment: