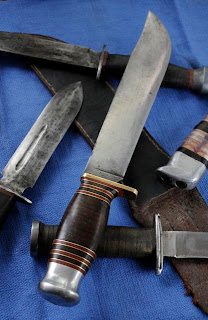 As Crocodile Dundee would say: THAT'S a Knife! 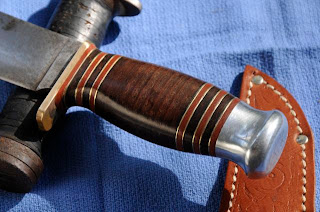 Hilt had been a flaky, awful, gungy mess.

Bid on it though it looked rough in spots. When I unpacked it the biggest problem was that someone had shellacked the handle and it was flaking off. A little steel wool took off the varnish and brought out the brass washers. Clear leather polish brightened up the leather. Knife was solid in every other way. Original sheath was included but it's not usable, though very interesting to have.