It's better than mistaking a Moose for a Poodle....

In Maine a woman mistakes a Bobcat for a housecat.
Posted by Robert Langham at 5:14 AM 1 comment: 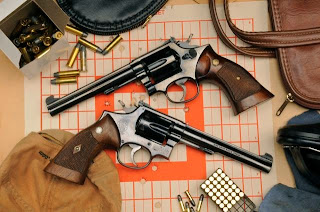 Jackson and I shot the calendar today.  I worked at the studio and brought guns in from Coyote Sam's Bar and Grill.  Plus a few others.

Long day shooting but was certainly easier in the studio than on location.  Mostly new backgrounds.  I think we shot 12 to go with the three or four I already had.  Did two backgrounds, a Shiprock chiseled stone from the ruin of a house and the star in a blue field off an old American Flag.  Ready to go in the morning. 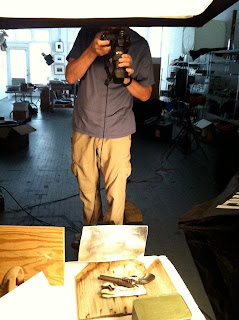 Glad to have it done.  In the studio I could set up a couple of photos, shoot one, go to the next and come back and correct the previous before tearing it down.  Always nice to have a little time to reflect. 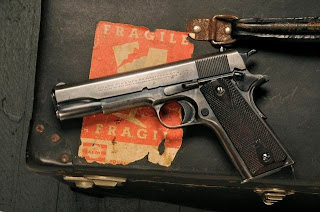 Ought to make a wonderful calendar for 2013 and be a valuable fundraiser for the TSRA. 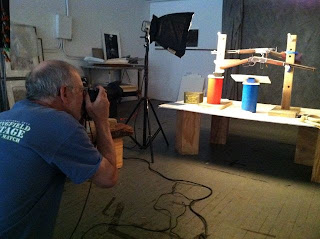 Shot this with a couple of backgrounds.  Worked tabletops mostly but did go into horizontal for a few. 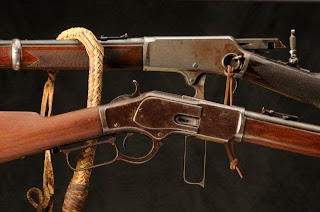 Softboxes.  Reflectors.  Tape and clamps.  Shot wide and telephoto.  I've got a bunch of old cameras in the studio currently so we worked a few of them into shots. 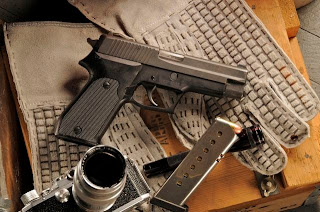 Ebay-bound Canon rangefinder, my Sig 220, concertina gloves from the army, HXP 30-06 crate from the CMP.

Didn't have the Good Doctor Sneed this year due to scheduling, but I used his rifle rack several times.

A couple weeks back at the Tyler Harvey Hall Gunshow a guy was outside by the line handing out little paper announcements of an open carry march on Independence Day.  Sounded nuts.  Folks were to gather at City Hall and walk to Bergfeld Park carrying, (as is legal in Texas), rifles or shotguns.  I'd always thought this was  the proper way to spend the 4th but considered it as likely as a rain of golden meteorites.  Less than 20 people would show up.  Half of them would be from LEO agencies.  All you would accomplish is getting on everything from the Fusion Center Terrorist alert computer to the TSA no-fly list.  Then if your face was on TV you would get marginalized, blacklisted as a troublemaker and then fired from whatever job you had managed to hang on to in Obama's America.  When it came down to a choice between slavery and rebellion, most everyone pretty OK with slavery.  Why be a target?

Beyond that, as the date got closer, I couldn't find a news story or a facebook page or any other mention of the event.

Still, I'd always thought of walking with a rifle in a march on the 4th to be...well, a red-blooded American thing to do.  And I hardly have a job anyway.

So I sorted through my gun rack and finally settled on a rifle, dropped in an old chamber block, grabbed a water bottle and had Jackson run me down to City Hall.  I might be walking by myself, but I was resigned to walking.  If anyone showed up they were likely to be nutcases, not competitive shooters.  Anyone half lucid would no doubt be an FBI plant who wanted to get a drink after it was over and speculate on bombing some public building and would know a guy, you know?

So imagine my surprise when we pulled up and actually saw a crowd building.  Boys and girls.  Kids.  Folks in wheelchairs.  Decent looking folks.  Flags.  Pellet rifles and scoped Remingtons.

So away we walked. 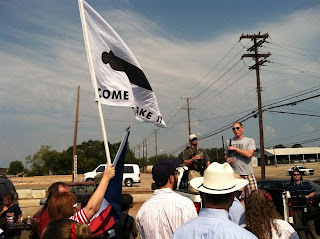 Safety briefing by sensible guys and a few simple instructions. 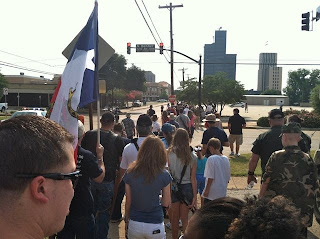 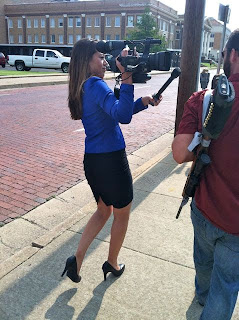 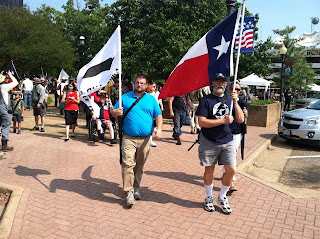 Coming off the square after a couple of go-rounds.  The Farmers Market folks were a little surprised to be surrounded by the hardware enhanced marchers! 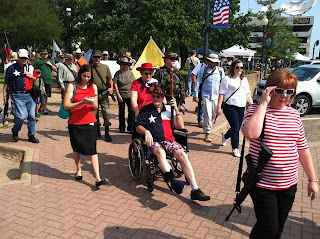 Walking and rolling for Civil Rights. 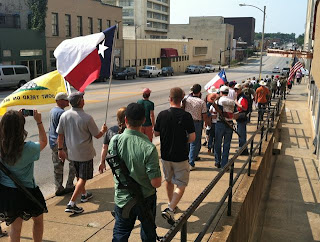 South off the square on Broadway. 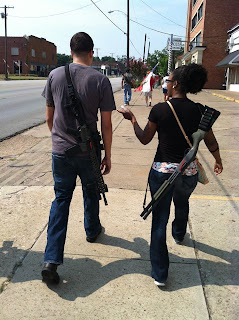 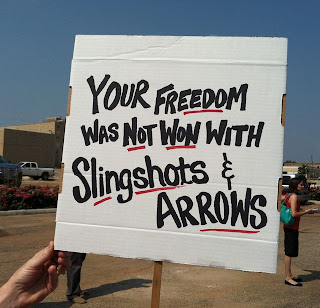 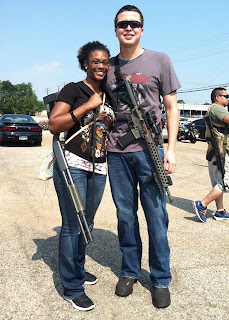 Diversity: Rifle and Shotgun people getting along.  Any movement that has good looking women and kids along is on the way up. 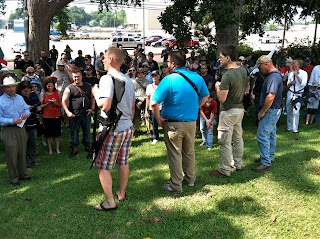 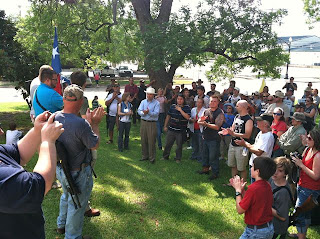 Under the shade trees at City Hall after the march. 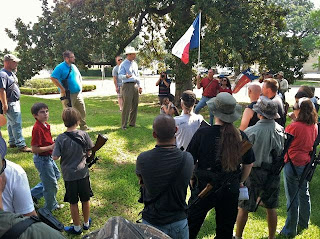 Politician from out of town on the stump. 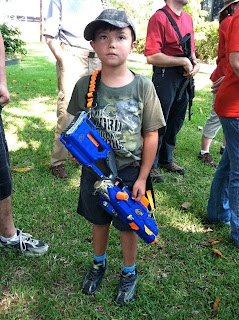 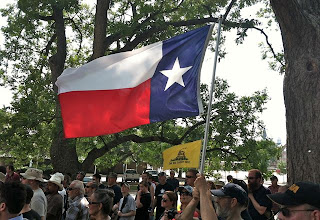 Not one of our local elected folks showed their face.  I'm sure they secretly support the Bill of Rights. Probably.  Somewhere they were no doubt making a patriotic speech! 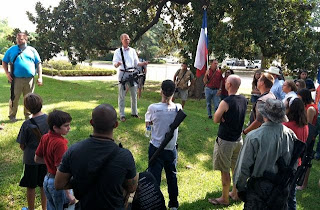 Austin Reeve Jackson running for Smith County DA.  I'd be for that. 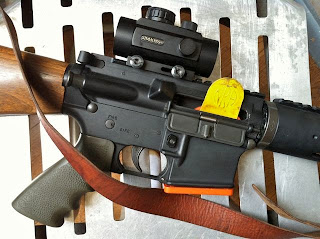 Harder to pick a rifle than one might think.  The Garand?  The other Garand?  The other, other Garand?  The M1 Carbine?  How about a 1903 Springfield?  Or Justin Burn's scoped 1903 Springfield.  Or just a plain old Rem 700 sighted in at 300 yards?  Or my Swiss K31 with its four Texas Championships plus the National Vintage Rifle Championship?  10/22?  Ruger #1?  Swedish Mauser?  Krag?  Arisaka?  Argentine Mauser?  German K98?  Finally made a choice: my little wood-stocked AR carbine.  That's Rick Crawford's old Chamber Block in the mag well.  My cute little Civil Rights rifle.  It marched.  How about yours?

Took about 45 minutes to make the circuit.  We went around the square a few times.  No counter-demonstrators.  The police were friendly and helpful and actually blocked intersections and watched out for us.  I'm sure they downloaded the NSA cell phone data and looked at my photos before I did but that's the way Obama's America runs these days.  The count was 192 folks.  That beats the outside agitated 99% march a couple years back.  We didn't have to bleat a slogan, just walk and talk with each other.

And now I'm a Civil Rights marcher!  Next year I'm going to borrow a flintlock from Sam and lug it around.  Or maybe I will go Garand.

No loud BOOMS.  (That would have wrecked the narrative of our event and been on every TV station.)  Good job of everyone being safe!

Update:  Wonder what a Freedom of Information request might reveal about how much surveilance we were under?