The Failure of Fannin. 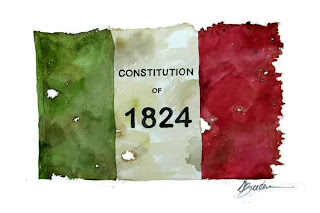 It's about 100 miles from Goliad to San Antonio in 1836. A man in haste on a fresh horse might make it inside two days. An army grinding along with wagons and equipment might take as long as six. Fannin had command of the biggest, best equipped and trained Texican Army in the state. He had one set of orders from Houston confirming that San Antonio and the Alamo were to be abandoned. Those were issued before Travis decided to make a stand there. A convincing argument could be made that with the cannon at the Alamo and the improvements made there in Texas largest city, site of a previous Texian victory, San Antonio was the place to fight. Certainly Travis, Bowie, Bonham and Juan Seguin thought so. All that was required was for Santa Anna to be pinned at the Alamo and confronted with a 500-man strong force from Goliad manuvering outside the walls plus the addition of men from Austin, Nacogdoches, Washington-on-the-Brazos. The men inside the wall anticipated being part of this fight. All that was lacking was leadership and coordination.

Fannin made a fitful and disorganized start from Goliad. His carts broke down just a few miles from town crossing a flooded creek. He had destroyed some supplies left behind and not brought others. His artillery was on one side of the flood and ammunition on the other. He received word of fresh supplies delivered on the coast at Matamores and decided to return to Goliad.

Travis sent couriers and news out daily and received word in return. James Bonham was the last courier to Fannin at Goliad. Fannin warned him that returning to the Alamo was a death sentence, so he knew the cost of his inaction to the men at San Antonio.

Bonham spat on the ground and said that Travis at least deserved to hear the news and was back on his horse.
Posted by Robert Langham at 4:41 PM