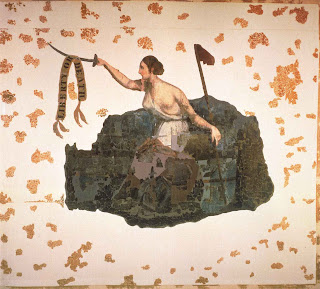 On the first day the Mexicans set a battery in town just North of Potero Street.  On day three they set one in La Villita (South) to support that day's attack.  Day four found guns placed across the river to the North and on day five they brought the North guns across the river and began to work them closer.  By day eleven they had moved all the cannon in to cover the attack routes or block escape routes.  The North battery had been moved down the now dry ditch to within 200 yards of the North Wall.  The defenders repaired the wall continuously, ramping up earth behind it and piecing together the wood face over the crumbling adobe.  The Mexican 12 pounders were still on the road South but every battery had been replaced and strengthened.
The engineers could only work at night.  In daylight Texicans shot anyone visible.
Santa Anna called a conference of his officers and staff at his headquarters in the Yturri house on the plaza to talk about an assault.  Some argued for waiting until bigger guns arrived to destroy the Alamo walls.  More battalions were just a few days march away.  By Monday all would be on hand.  The staff debated while Santa Anna listened.  There was worry about Texican reinforcements and the anticipation of a major moral boost by what was thought would be an easy victory.  Santa Anna seemed to favor an early attack.  There is some concern that the Texicans might surrender without fighting and a dramatic military action lost.
It was re-affirmed that there would be no prisoners taken.
The Texians were still hopeful of relief.  If the Gonzalez party could get through, so could other promised help.  They had a letter pledging men from the various colonies and couriers were still circulating.
Two Bexar women left the Alamo and gave the Mexican army a report on the conditions and placements of the defenders.  The crucial information seemed to be an actual count of the numbers of the defenders.  This information seems to have moved the attack up at least 48 hours.  Travis says he has 145 men in a letter.  Other counts put the number closer to 180.  Some have it as high as 250.  He needs twice that to man the cannon and to defend the walls.
Tactically, defenders always have an advantage over attackers.  Even if the walls are heaps of rubble it will take an overwhelming number to push an attack through to success.  The Mexicans have those numbers.  The question is if they will spend them.  The report of the Texican numbers by the two women seem to push the decision toward attack.

The decision is made by Santa Anna: Not waiting on the big cannons. Assault on Sunday morning the 6th. No prisoners.
It's Friday, March 4, 1836.
Update:  The official list has 212 defenders.  Not enough.

Update II: It's below freezing at night, mid-50s in the daytime. Overcast and raining to the south and east. Partly cloudy at San Antonio.
Posted by Robert Langham at 5:24 AM