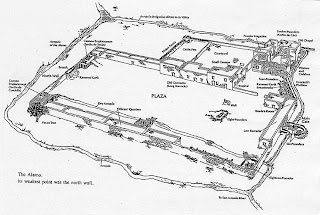 Santa Anna wasn't wasting his ride yesterday.  By 9:30 he had 200-300 Matamoros Battalion troopers deployed and moving toward the Alamo in skirmish lines from La Villita, South of the compound.  The Mexican Artillery supported from the Potero Street battery and a new position with the troops.

One good push and the rebels might throw down their arms and surrender.

La Villita and Pueblo Volera were poor villager quarters.  Families and camp followers of the Mexican Army quartered at San Antonio, (before the Texican conquest of the city), lived there to be near the soldatos at the fort.  The skirmish lines broke and reformed as they moved through huts, chicken coops, gardens, outhouses and goat pens.  Surprisingly, there were many people still IN their houses.  The Texicans deployed into trenches outside the Alamo walls and along the parapets.  Crockett was everywhere encouraging men and pointing out targets as the action heated up.

Matamoros closed to within pistol range before the line wavered and then dissolved.  Two men were shot dead.  The Mexicans broke for cover.  Six more fell wounded.  More Texicans appeared in the trenches, some darting from cover to toss torches on the huts shielding the attackers.  The officers reformed the lines for another assault but it was no use.  Tennessee lead was cracking through the roofs and walls of the houses, cutting twigs, kicking dust.

As the Mexicans fell back they took cover behind a house with a mother and a daughter who was beautiful enough to give pause to the newcomers.  The mother scorned the soldiers.  She was the widow of a Mexican officer.  Her daughter was not to be gawked at by peasants from Matamoros.  The Mexicans fell back beyond rifle range and began to dig in.

Santa Anna heard about the young woman and was intrigued.  Evidently the march North had not only been long, but hard.  He was a Mason, (a step away from a Shriner) and knew the road trip rules: what happens at the Alamo STAYS at the Alamo.  Over the next few days he arranged to have introductions made and, (forgetting about Mrs. Anna and all the Anna-litos back at the Presidential Palace in Mexico), proposed marriage.  One of his Colonels had a joking prankster in his unit, (never seen a brigade without one), who agreed to impersonate a priest and perform the rites.  Before the end of the week he had the young lady safely tucked away in his quarters in town.  When he left to campaign East he would send the girl back to Mexico where she gave birth to a son nine months later.

The fog of war.

Back in La Villita the Texicans were looting huts and burning everything in rifle range of the walls.  Matamoros stayed in cover.  As darkness fell that evening the Texicans came out by horse and foot and burned houses as far as 600 yards.  The Mexicans resisted but fighting broke off at 1:00am as a cold rain began to fall.  The temperature dropped 30 degrees.  A blue norther had arrived.

In the rain, smoke and confusion Tejano Juan Seguin left to take the word to Houston at Washington-on-the-Brazos.   He rode Bowie's horse and bluffed his way past a roadblock speaking Spanish.

Nine men deserted into Mexican trenchworks, bargaining for their lives with the location of a 50 rifle armory hidden in town.  One of those things.

A Mexican reconnaisance-in-force was detected behind the East side cattlepens and fired on by cannon from the Long Barracks and Chapel.

Update:  On the yesterday's tour Santa Anna came closest along this South wall.  The main gate had been covered by an external blockhouse but the low barricade at Crockett's position must have looked likely.   Plus: La Villita gave good cover until you got close.

Update II:  Is there a Mexican version of "How I Met Your Mother"?

Update III:  TWO dead?  Six wounded?  Crockett killed 108 bears in one season.  I would have thought the Tennessee boys would have stacked them up like cordwood or men who got bored watching cactus grow over the North wall gotten lucky a time or two.   Must have been awfully good cover.  Missed a real chance to take a bite.

Update IV:  Nine guys decide this is a little too intense.  Self-sorting.  Good time to peel off, while everyone is beyond the walls.  Takes the number down to 137, minus about six people that Travis has out delivering messages to Goliad, Gonzales, and Houston.

What a company to be in!
Posted by Robert Langham at 4:28 AM